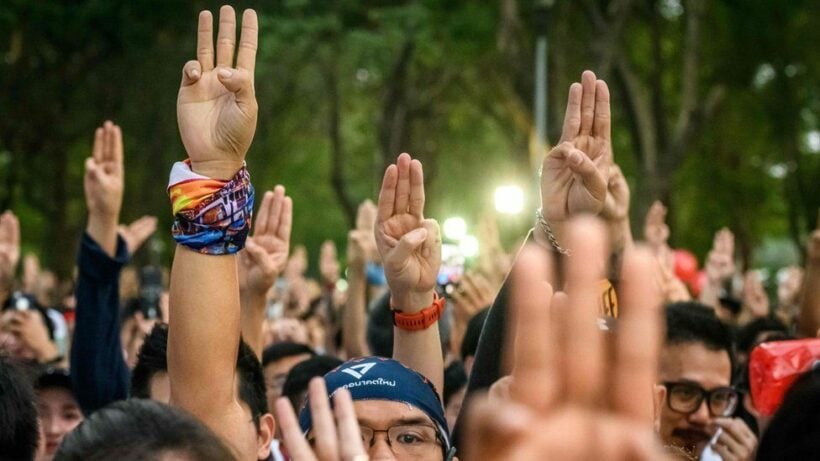 The 3 finger salute, now adopted by Thai protesters as their “go to” symbol in the current round of rally’s and protests against the Thai government and establishment, emerged originally from pop culture. 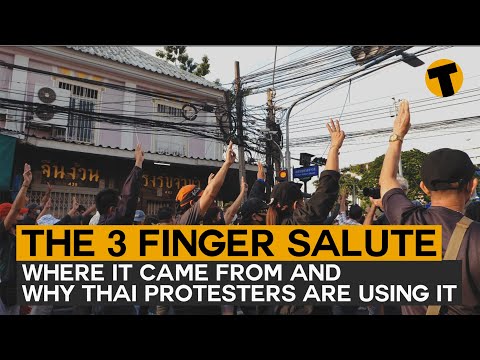 In the Hunger Games movie franchise, the residents of a dystopian future North America, forced to compete in a televised death match for the pleasure of the elite – used the gesture to mean thanks, admiration and goodbye to someone they love.

But in the Hunger Games the symbolic gesture morphs into a more general symbol of an uprising against the privileged, totalitarian overlords, protected by a zealous military. The drama of the symbolism wasn’t lost on the young Thais who drew their own parallels and ‘owned’ the gesture as their own.

The first Hunger Games film was released in 2012. The same salute was first used in Thailand after the military coup in 2014 to show defiance against the unelected Junta which had seized power from the elected Yingluck Shinawatra government.

The leader of the coup, and now Thai PM Prayut Chan-o-cha, remains a key target of the young protesters.

Amongst their grievances, they demand the standing down of the prime minister, the dismissal of the current government, new elections, and a new constitution to replace the 2017 Charter.

Controversially, the protesters are also taking aim at Thailand’s revered Monarchy, up until recently a taboo topic that would never be discussed in polite Thai conversation, let alone be criticised publicly.

During an August protest this year a 10 point manifesto was read out, listing the grievances against the un-elected government but also, for the first time, publicly voiced demands for reform of the country’s Head of State including its powers and perceived interference with Thai politics.

Up to now the 3 fingers salute, indeed the entire spectacle of their subjects protesting, has been kept well away from Thailand’s royal family. That was until October 14 when the scheduling and routing of a royal motorcade, with the Queen and young prince on board, dragged the motorcade directly into the path of a protest gathering of some 10,000 people – a protest that had been announced almost a month before, including the date and the location.

3 senior police have now been removed from their posts and being asked to explain how and why senior royals were exposed to potential danger. As you can see the 3 finger salute was being aimed directly at the occupants of the yellow Rolls Royce. The anger, the shouts of “our taxes” and the long lines of protesters could not have been unseen or unheard.

Whilst the meanings and intent of the 3 finger gesture may have been lost from the original movie, it has certainly become the symbol for the latest protest movement as a simple but potent symbol against oppression, demands for freedom of speech and a call for democratic reform in the South East Asian nation.

What makes this round of protests different from the protests of Thailand’s past, is the make-up of the rallies – mostly younger university and school students who are becoming politically savvy at an earlier age and wanting to grow up in a very different country than their parents.

They are exposed to social media and have a vast array of news sources and opinions at their fingertips, shaping a young political voice which wants to avoid, at all costs, the Thai cycle of coups, constitutional re-writes, new governments, another coup, etc, etc.

In Thailand, a hugely disproportionate chunk of wealth is concentrated in the hands of an entitled elite, where Army generals have launched repeated coups to protect their interests – some 13 coups in the past 90 years since Thailand became a constitutional monarchy with an elected government.

Since 2014 the three finger salute has become the go to symbol – right arm raised, 3 middle fingers reaching for sky – by rally crowds and flashed by activists as they strolled into court or were bundled into police vans.

The Thai government, which draws its power from the Thai Army and support from the country’s Head of State, now faces a younger, more politically educated adversary… with a voice that can be shared with millions.

What the protesters may lack in resources and weaponry, they make up with determination, growing numbers and the power of the simple 3 finger gesture.