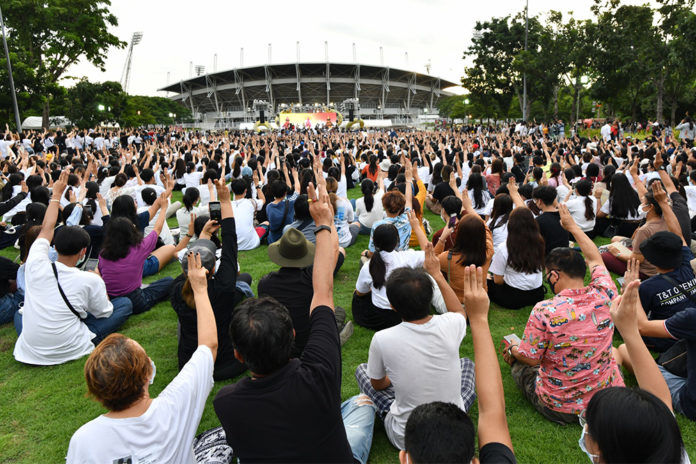 Students protesters are moving forward with rally plans for this Saturday, September 19, at Bangkok’s Thammasat University Tha Prachan campus, despite failing to get permission from university administration. The campus has been chosen before for such rallies and some students are reportedly threatening to break into the campus if they have to.

The United Front of Thammasat and Demonstration Group has made waves recently for their anti-government protests with student leaders saying they will camp overnight if necessary, a move which has left security officials unimpressed.

The group plans to march to the Government House at the conclusion of the protest, and may even spread out across the Royal ceremony field of Sanam Luang, across the street from the university campus. Authorities have responded to the news saying that anti-riot police will be in place at the 3 locations in preparation for what could be the largest protest yet against the government. Demonstrators say there will be 50,000 at the event, police say it’s likely to be more like 20,000.

Such a protest comes after rumours swirl of yet another military coup in the near future, though PM Prayut has publicly shot down such allegations. Still, such a demonstration on the historic campus has some concerned as it is no stranger to violent clashes. In 1976, three years after the ouster of a dictatorship by the so-called Three Tyrants, leftist students who protested the return of such a dictatorship were beaten, shot, raped and murdered by officials and opposition groups. Official figures put the death toll at 46, with 167 wounded and more than 3,000 arrested. However, survivors put the death toll closer to 100. The clash was then used to justify a military coup which overthrew the democratically-elected government.

Now, Thammasat University alumni on both sides have joined the battle with one side penning an open letter on September 14 calling on university officials to reconsider the ban.

Protesters on August 10 submitted a 10-point manifesto on monarchy reform in the university’s campus which then prompted the university to prohibit the rally citing organisers had yet to comply with guidelines set forth on holding campus political activities. However, one reason the campus was selected was due to its exemption from the Public Assembly Act which came into force in 2015. The act states that organisers do not need to seek permission from the police to hold protests on the campus.

Protesters appear to be protected under the act, but will be at risk of violating the law if the rally spreads to Sanam Luang or the Government House as currently the law states, “No public assembly shall be held within the National Assembly, Government House and Courts of Justice.”