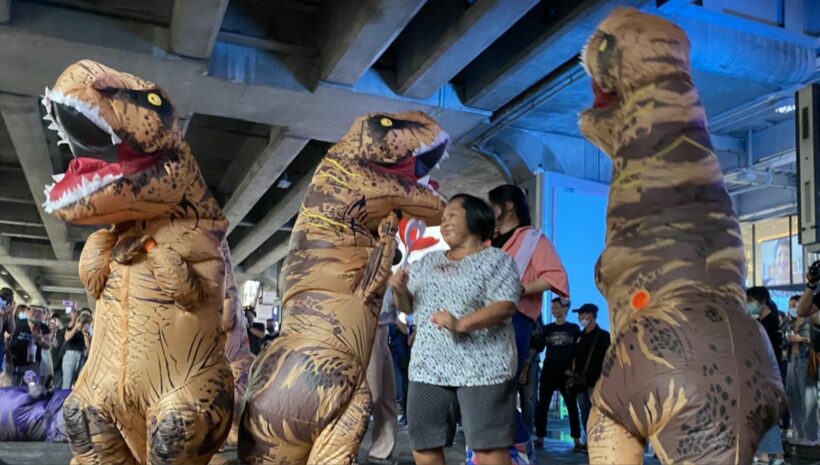 Jurassic Park meets Bangkok politics. Some students attending yesterday’s Bad Student protest in Bangkok dressed in dinosaur costumes to represent Thailand’s establishment. The high school-aged students are joining in the calls for the Thai Prime Minister Prayut Chan-o-cha to resign and reform of the Thai monarchy. They are also demanding reform of Thailand’s education system and an end to sexual abuse and harassment from the teachers and school officials.

Inflatable plastic meteors, proclaiming the end of the dinosaur age bounced over the heads of the protesters, a few dressed in Tyranasaurus Rex costumes, as they danced to anti-government rap songs, organised by the Bad Students. They claim the the country’s education system elevates rote learning and unquestioning deference to Thailand’s strict hierarchy instead of critical thinking.

“The dinosaurs are these government officials who have decision-making power over our lives.”

It was the first large protest since the PM announced last Thursday that “police would use all laws against protesters”. The protests – their demands and their sheer scope – are a major challenge to the “establishment” which runs Thailand, in the form of a quasi-democratic government under an unelected Head of State.

“We represent the meteorites crushing the dinosaurs to extinction.”

The Education Minister announced a revision of the Thai school codes that would allow greater flexibility in many areas, including the dress and hair codes. But his announcement also said that local schools could use their own discretion to administer the codes.

“I have been sexually abused by teachers. School is not a safe place.”

The students were careful about direct references to the monarchy, unlike the main protests have been far more outspoken about the issue and incurring the wrath of Royalists and pro-establishment supporters.

PM Prayut has consistently rejecting the demand of protesters, including his resignation, and their accusations that he rigged the March 2019 election to keep his hands on the levers of government, seized in a military coup in 2014. (The real T-Rex was not part of the Jurassic era. T Rex fossils are found in a variety of rock formations dating to the Maastrichtian age of the upper Cretaceous period, which lasted from 67 million to 65 million years ago, toward the end of the Mesozoic Era)