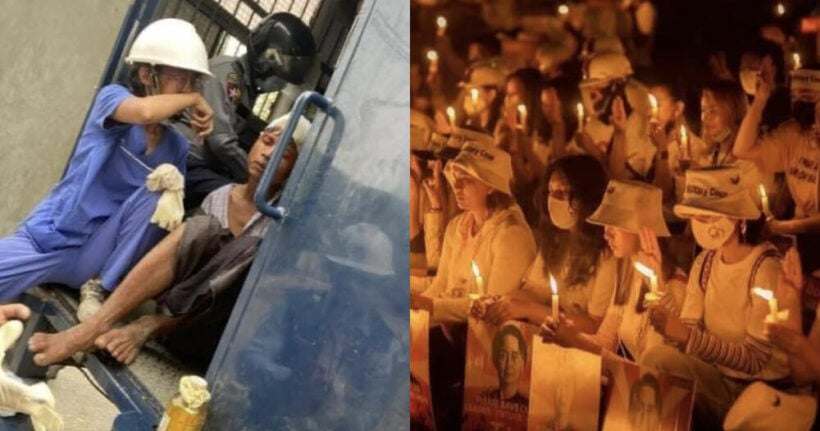 Myanmar’s anti-coup activists are hurling garbage into the streets after more than 500 people have been killed since the junta took over. Protesters held candle-lit vigils for the deceased last night as yesterday saw 14 civilians killed, according to the Assistance Association for Political Prisoners.

According to witnesses, security forces fired a much heavier-calibre type of weapon yesterday to clear a barricade of sand bags. In a new tactic, protesters today are stepping up a civil disobedience campaign by asking residents to throw garbage onto streets on key road intersections. The move comes after loudspeakers boomed in Yangon neighbourhoods yesterday urging residents to dispose of garbage in a proper manner.

Today, 3 groups called on the military to stop killing peaceful protesters and resolve political issues. The groups include the Myanmar National Democratic Alliance Army, the Arakan Army and Ta’ang National Liberation Army. They warned if the military did not do this they “will cooperate with all nationalities who are joining Myanmar’s spring revolution in terms of self defence.”

Though many groups have agreed to ceasefires, heavy clashes erupted on the weekend near the Thai border between the army and fighters from Myanmar’s oldest ethnic minority force, the Karen National Union. About 3,000 villagers fled to Thailand when military jets bombed a KNU area after a KNU force overran an army outpost and allegedly killed 10 soldiers.

Thai officials have recently denied that they have sent more than 2,000 refugees back to Myanmar, but 1 Thai official did say it was a government policy for the army to block them from crossing the border and deny access to outside aid groups.

Thailand’s PM Prayut Chan-o-cha is denying backing Myanmar’s junta government. PM Prayut made the announcement to the media yesterday at the Government House.

“In what ways do we support Myanmar troops? Nobody supports use of violence against the people.”

Recently, PM Prayut was accused of supplying rice to Myanmar’s military, in which he denied. He also defended the Thai military’s decision to send representatives to attend Myanmar’s Armed Forces Day celebrations, saying Thailand needs to engage and maintain a communications channel.