As yesterday and this morning’s major rally wraps up, protest organisers have already announced the next rally for October 14, the anniversary of the 1973 student uprising. Another gathering has been announced for this Thursday outside the Thai parliament. The growing tide of support for the student protesters, who government supporters are accusing of being puppets for “dark” opposition voices, continues to be a thorn in the side of the ruling coalition and Thai PM Prayut Chan-o-cha.

The popular uprising of 14 October 1973 was a watershed event in Thailand’s history. The uprising resulted in the end of the ruling military dictatorship of anti-communist Thanom Kittikachorn and profoundly altered Thailand’s political landscape. The protests highlighted the growing influence of Thai university students in politics -Wikipedia 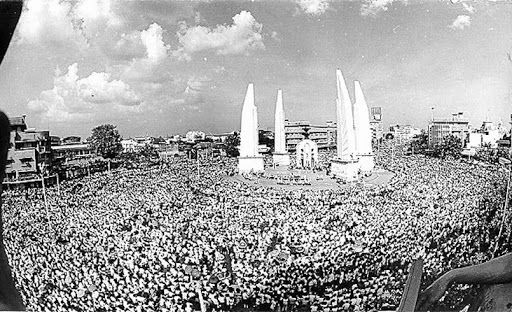 Yesterday’s rally, which ran late into last night with thousands of protesters camping overnight on the royal parade grounds of Sanam Luang, ended just before lunchtime as the official “list of demands” were handed to the chief of the Bangkok Police Bureau.

The demands continue to include reform of the Thai monarchy, and other political reform, as outlined in the 10 point manifesto that protest organisers want presented to the Privy Council. Just outside the Privy Council Chambers, protesters quietly and briefly handed the document to the Pol Lt Gen Pakapong Pongpetra of the Metropolitan Police Bureau. It was handed to him by Panusaya Sithijirawattanakul, one of the core leaders in the United Front of Thammasat and Demonstration. Panusaya was the young female student who stood up at a protest gathering at Thammasat’s Rangsit campus on August 10 and read, for the first time, the list of demands contained in the manifesto.

Panusaya told the BBC earlier this week that she realised, following her August pronouncements, particularly regarding the Thai Head of State, that her life would never be the same.”

“There was fear lurking inside me, deep fear of the consequences.”

At the time of reading out the now infamous ‘manifesto’, even Panusaya thought the wording of the words were very ‘strong’ and realised that it would start a ball rolling that she would be unable to stop.

“I held hands with my fellow students, asking aloud whether we were doing the right thing here. The answer was yes – it’s the right thing to do. I then sat down again, smoked a cigarette before I went on stage and let everything in my head out,” she told BBC Thai.

Earlier today demonstrators installed a plaque, actually a replacement brass plaque, to declare the beginning of a new people’s movement. An original plaque had been located in the Royal Plaza commemorating the 1932 Siam Revolution, which ended up overthrowing Thailand’s absolute monarchy, and replacing it with a constitutional democracy, with he Thai monarch acting as the Head of State. The original plaque mysteriously went missing in 2017 with no one admitting to removing it or knowing anything about its whereabouts.

Politically, the protest organisers’ other demands include a new constitution to replace the 2017 Thai Charter, the resignation of the current government and PM, and an end to ongoing “harassment” of critics of the government, which includes arrests, people being followed and social media shaming by opposition MPs.

During the week Thai PM Prayut asked the protest organisers to postpone the weekend’s rally citing possible infections of Covid-19 as a reason to be concerned. Excepting 3 possible local infections (that are currently being investigated), Thailand had a run of 101 days without any recorded infections of the coronavirus.

Some 30,000 people defied the rain and sea of umbrellas to attend the rally which started by breaking into the Thammasat University Tha Prachan Campus grounds, moved to Sanam Luang, and then this morning to the chambers of the Privy Council to pass over the document.