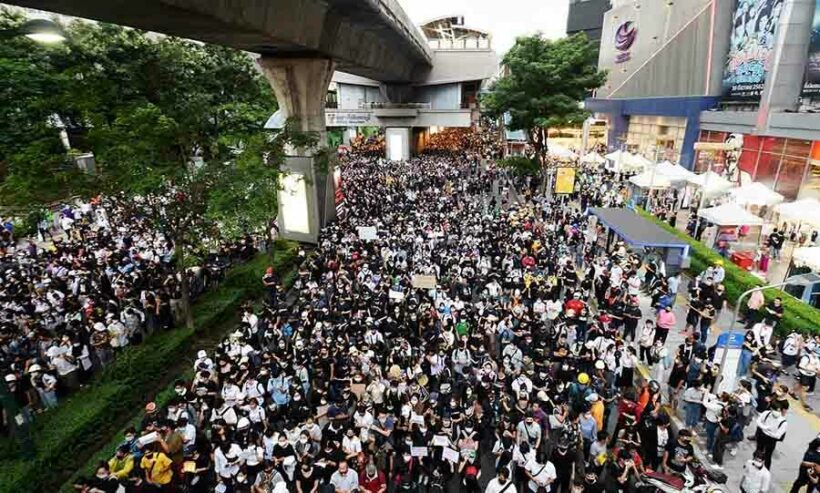 The deputy commissioner of Bangkok’s Metropolitan Police Bureau says the force is ready to handle pro-democracy rallies planned for Thursday. Piya Tawichai says 4 groups are expected to stage rallies to commemorate a revolution carried out by Khana Ratsadon (The People’s Party) on June 24, 1932.

The authorities are expecting rallies from 4 pro-democracy groups commemorating the 89th anniversary of the revolution, which changed Thailand from an absolute monarchy to a constitutional monarchy.

The Bangkok Post reports that the groups expected to take part are the “New Generation of Democratic People of Nonthaburi”, who will assemble at the Democracy Monument on Ratchadamnoen Avenue from 11am. The “Prachachon Khon Thai” group will gather at Government House at midday, calling for the resignation of PM Prayut Chan-o-cha. The “Mu Ban Thalufa” group is expected to gather at the October 14 memorial on Ratchadamnoen Avenue from 1pm. The fourth group is “Samakkhi Prachachon”, which will be led by the former leader of the United Front for Democracy against Dictatorship, Jatuporn Prompan. The group is also expected to gather at Government House but Piya did not confirm the exact time.

The deputy commissioner of the MPB has issued a warning that Bangkok remains under an executive decree that bans mass gatherings during the pandemic. He adds that anyone who violates the decree could face prosecution, pointing out that daily new infections are still being reported in the capital.

“Those taking part in the protests should avoid gathering in large numbers. They might benefit from the political protests but the country as a whole will suffer from their action. They should consider staging the rallies after the pandemic has subsided.”

Meanwhile, Pakapong Pongpetra, MPB commissioner, has met with city police to allocate manpower for Thursday’s rallies and says officers will be deployed to guard significant landmarks in the capital.

Poolie
Must be an old photograph, taken when people cared about demonstrating. Now they're lucky to get 20 die hards.