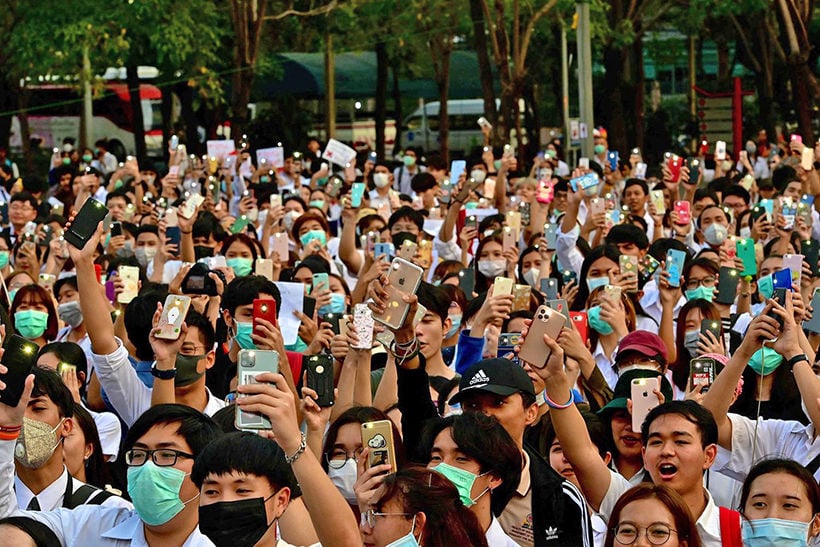 Deputy national police spokesman Krisana Pattanacharoen yesterday issued an ominous warning to students participating in the wave of rallies and demonstrations sweeping school campuses across the Kingdom. He says they are free to exercise their right to assembly but cautions them against “touching the institution,” an apparent reference to the monarchy.

“There were examples in the past and we don’t want to take legal action [against them] later,” Krisana said, without elabourating. He opined that the protesters should also think about whether their actions are “infringing on other people’s rights.”

“As for which group is behind them, it was clear even before the [Constitutional] Court disbanded the Future Forward Party. People were urged to join the Run Against Dictatorship activity,” he said, referring to parallel running events in several provinces or “Wing Lai Lung” (Run to Oust Uncle), where participants called on PM Prayut Chan-o-cha to step down.

University and high school students have been increasingly rallying on or near their campuses every day since Monday, demanding change. Their demands include a rewrite of the 2017 Constitution and Prayut’s resignation, to pave the way for a competent government and full democracy.

Krisana’s warning comes after Prayut pointed out that some demonstrators were making other demands, some touching on the monarchy, in addition to pressing for more democracy.

During the no-confidence debate on Thursday, Prayut told lawmakers he understood “the good intentions” of the demonstrators and said the government is trying to avoid any impact. But he repeated the view expressed by many conservative elements that young people are being manipulated.

“Any action taken will be by law. In fact, we haven’t taken any action. We’re concerned the students don’t really understand the situation. They might have been swayed or heard only one side of the story.”

“I urge them to listen to the government and decide for themselves what to believe. My concern is … the law is sacred. It doesn’t matter whether it’s today or in the future [the law will catch up with them]. Several people have been prosecuted for their roles in [the events of] 2010 or 2014, regardless of politcal colours. But what happened in 1973 and 1976 was different and we haven’t done anything to create a condition for that”

Th PM was evidently referring to the red-shirt and yellow-shirt protests of the 2000s and the bloody crackdowns during the Cold War when fears of communism and threats to the Royal Family ran high.

“Today, I’m more concerned about the future of the demonstrators. I’m not angry at them. After all, they have been ‘stimulated’.”

“But I have to warn you here that insults to the monarchy are being used to drive the agenda. Are you okay with that? If you are, then I am too. If you think it’s right, then I don’t know what to do and will be forced to act by law.”

“Don’t do it. I plead with you. I believe Parliament respects the institution. I’m confident it does. So don’t do it. If it comes to that, your worst fear may come true.”

On Friday, a group of students who held a rally in Chantha Buri province were fined 5,000 baht for breaking the public assembly law.

Some 800 students of Rambhai Barni Rajabhat University and their supporters gathered in a field near the university after the management did not allow them to use the campus.

The new public assembly law doesn’t apply to assemblies on campuses, but for demonstrations in other public spaces, organisers must inform police first so they can provide them with security and accommodate passers-by. Police initially fined the group 20,000 baht but they bargained it down to 5,000 baht.

In an apparent bit of political manoeuvring, Public Health Minister Anutin Charnvirakul today asked students to “think twice” about staging more events in order to reduce the risk of spreading the coronavirus.

“Big crowds are now very risky. If someone in a crowd [was] infected, we’d have to track down many people. The numbers of patients could be more than we can handle. I don’t want to block your political will, but please think about society.”