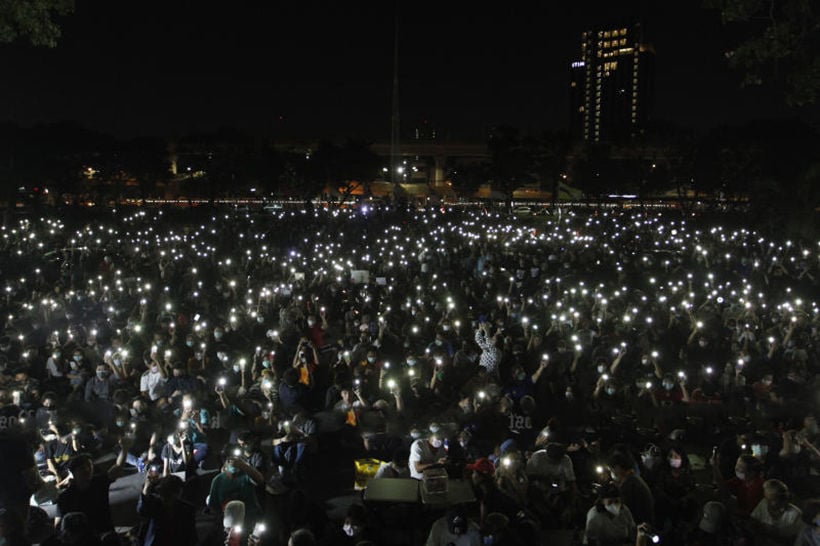 About 700 students joined a rally last night in front of the auditorium at Bangkok’s Kasetsart University, vowing  to escalate their protests until the government of Prime minister Prayut Chan-o-cha steps down. University and secondary students have been rallying on or near their campuses since Monday to demand a rewrite of Thailand’s 2017 Constitution and transparent elections. Pro-democracy activist Parit “Penguin” Chiwarak, who co-organised the three-hour demonstration, told reporters:

“We won’t stop here, though I can’t say yet whether our next move will be a mass rally or a street march.”

Leaders of the now-defunct Future Forward Party (FFP) didn’t attend the Kasetsart gathering as was earlier reported, although the party logo was seen on equipment used by the flash mob’s participants.

Parit, a student of Thammasat University, is himself a former FFP member. He joined ex-leader Thanathorn Juangroongruangkit in another, controversial flash mob late last year in central Bangkok, in response to the Election Commission’s decision to ask the Constitutional Court to disband the party.

Students have held many rallies since the court dissolved the FFP on February 21 for taking what it ruled an “illegal loan” from Thanathorn. But one rally leader who identified herself only as “Jinny,” said:

“We’re not gathering today to save any one party, only our future.”

Organisers of last night’s event say they have launched a webpage, “MobGunMai” (“Let’s Mob Together”), to give updates on their movements and compile video clips of similar rallies nationwide. The gathering at Kasetsart University was just one of several protests held across the nation this week, with more scheduled in the coming days. Police have warned demonstrators that they are free to exercise their right to assembly but cautions them against “touching the institution,” an apparent reference to the monarchy.

On Thursday, Srinakharinwirot University was jammed with students, most of them freshmen and sophomores, who gathered on its football field to hear speeches about the state of democracy in Thailand and the unfair treatment (they feel was) given to the Future Forward Party. “Tuanote,” a 20 year old sophomore, said he joined the activity because he wants to oust the Prayut government.

“We’re not just representing the six million voices silenced by the disbanding of the Future Forward Party, but also those who want this country to be a real democracy.”

On Friday, a group of students who rallied in Chanthaburi province were fined 5,000 baht each for breaking the public assembly law. And around 800 students of Rambhai Barni Rajabhat University and their supporters gathered in a field near their school after management refused to let them use the campus.

Students warned of limits on free speech, told not to threaten monarchy