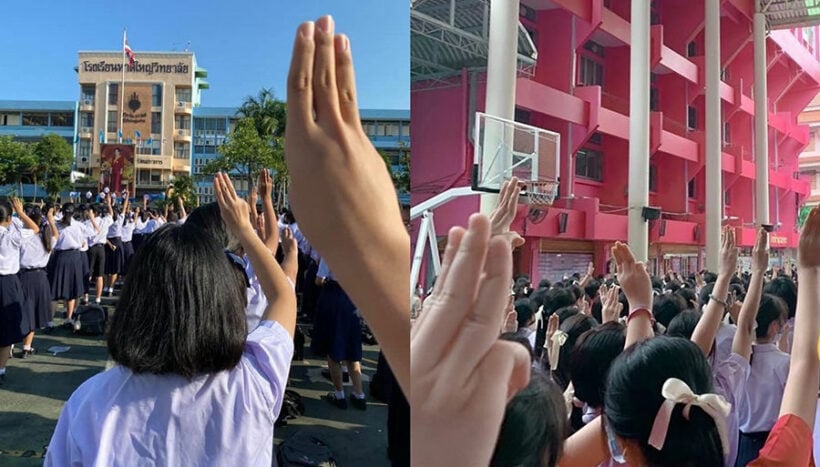 At high schools across Thailand, pupils have used the daily flag-raising ceremony to show their solidarity with anti-government activists. A report in Khaosod English says pupils in at least 10 schools wore white ribbons and held up three fingers, in what is widely recognised as an anti-military gesture. The students’ actions have been captured in photos and video, which have been shared on social media.

Students around Thailand are adorning white ribbons and raising the three finger salute at the national anthem to show their resistance against dictatorship ? #โรงเรียนหน้าเขาไม่เอาเผด็จการ #upfact #ขีดเส้นตายขับไล่เผด็จการ pic.twitter.com/kZEIkAw1uu

A number of pupils complained about being intimidated by their teachers, while some say they were assaulted for taking part in the activism. Chatchawan Apirakmunkong, from the now disbanded Future Forward Party, claims pupils at one school in the north-eastern province of Khon Kaen, had their white ribbons seized by police. The students had the ribbons tied to their school bags to show their support for pro-democracy activists.

“Police officers were present at the school and confiscated white bows from students. I disagree with the police’s action and demand officers stop infringing on the students’ rights under democracy.”

However, local police chief, Kajornrit Wongraj, says the accusation is untrue, adding that his officers were merely there to keep order and took nothing from the students.

“We were there after we learned about the posts online calling for a protest. We didn’t touch the students at all. Only a few students participated in the event.”

At another school, in the northern province of Nakhon Sawan, video footage shows one teacher shouting at pupils for disrespecting the school, telling them to delete a clip that shows them flashing the three-finger gesture. The same teacher is also accused of hitting one pupil across the head and is understood to have since apologised to the student’s family.

PM urges police to exercise restraint in dealing with protesters