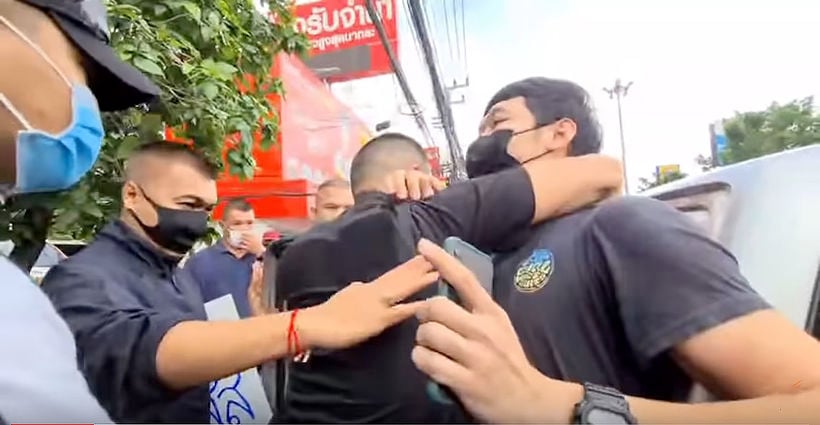 PM Prayut Chan-o-cha’s visit to Rayong yesterday was marred by drama as 2 protesters were forcibly removed and taken into custody after raising signs condemning him just minutes before his motorcade arrived. The signs, expressing fury over the government’s recent mishandling of an imported case of Covid-19, read… “If you stay longer, the country will be in ruins. Get out, you bastard” and “Don’t lower your guard, my a **”. The latter apparently referred to the daily admonishments from health officials for people to” keep their guard up. “

The 2 people, identified as Nutchanon Payakaphan and Panupong Jadnok, were seen taken away in a Rayong police vehicle. Both resisted arrest, demanding to know what crimes they had committed.

“Tell me first what I did wrong?” Nutchanon shouted before being put into a headlock by an officer and forced into a pickup truck. Panupong was also forced by at least 5 officers into the same vehicle.

The pair were charged with violating the Emergency Decree , which since March has grants powers to authorities, ostensibly to control the spread of Covid-19, though it has been criticised as a means to control the public. Police say they violated the decree by protesting in public without permission. Nutchanon says both men will file charges against police for assaulting them.

The arrests came just minutes before Prayut’s motorcade arrived at the hotel where a visiting Egyptian aircrew stayed last week. Despite assurances that strict quarantine rules would apply to visiting foreign nationals, the 30+ military personnel were allowed to leave the hotel and go shopping at 2 malls. 1 of them later tested positive for the virus, leading to fears of a “second wave” of infections in the province. Thailand has not seen any domestic transmissions of the virus in nearly 2 months.

More than 1,400 residents came out to be tested for the virus and more than 200 local schools have been shuttered. Hopes for a tourism recovery in the province have been crushed with 90% of hotel bookings and all reservations for Koh Samet reportedly cancelled this week.

CCSA quashes reports of a new Covid-19 case in Bangkok