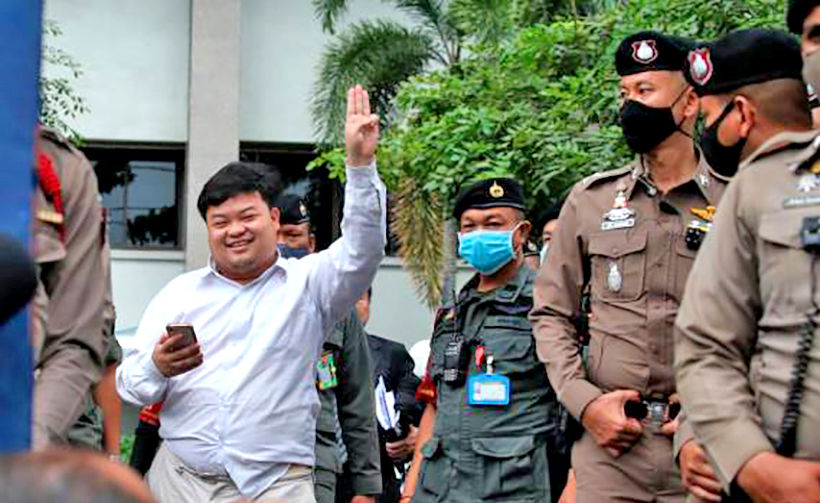 22 year old anti-government activist Parit Chiwarak, known by his nickname “Penguin”, was released on bail this afternoon around 2:15 in Bangkok. He was arrested yesterday and charged with breaching internal security rules and breaking the Emergency Decree enacted in April to stop the spread of Covid-19, among other charges, by co-organising a protest on July 18.

Since that July protest, student groups across Thailand have rallied almost daily, demanding the removal of PM Prayuth Chan-ocha, who took power in a 2014 military coup, a rewrite of the nation’s Constitution and an end to the military domination of politics and state intimidation of critics.

Some students have also demanded reforms to the powerful monarchy, a highly taboo subject.

The court warned Penguin not to repeat his offences, which include allegations of sedition and violating the Emergency Decree to control the Covid-19 Coronavirus. His hearing is scheduled for September.

Parit stated shortly after his release, where he was greeted by dozens of supporters, that he plans to attend a major rally tomorrow at Democracy Monument in Bangkok. He did not state if he would specifically speak at the rally, which could potentially violate the terms of his bail.

Supporters protested his arrest heavily in what they described as “a peaceful manner” at both the police station where he was detained last night and at a court appearance this morning. Nearly 400 uniformed Thai police were present watching the situation closely.

Parit told reporters he’d been ordered not to re-offend as a condition of his bail, but the court agreed he could take part in tomorrow’s rally at Democracy Monument. After reciting a 10 point call for monarchy reform issued earlier this week by 1 of the student groups, Parit said:

“My arrest must not be wasted, people must talk more publicly about the Monarchy. We have lifted the ceiling, there is no lowering it now.”

Thailand’s monarchy is protected by a strict lèse-majesté law that punishes anyone who offends the Monarch or his family, but the PM said earlier this year that the king has asked for it not be used.

Prayuth appealed for national unity earlier this week but also said some of the student activist demands on the Monarchy “went too far.”

2 other activists were arrested last week and later released on charges similar to Parit’s, and Human Rights Watch said the criminal court has issued arrest warrants for 12 others for organising the July 18 rally.