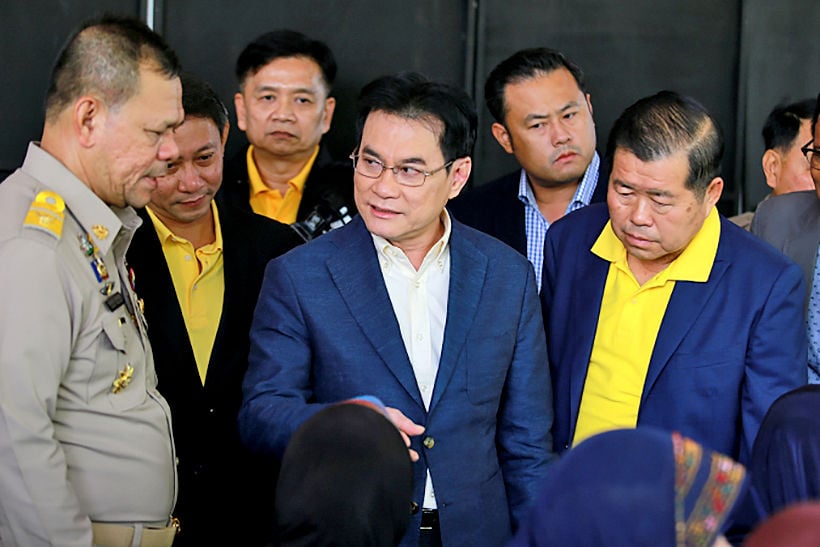 The new Thai Commerce Minister Jurin Laksanawisit (and leader of the Democrats), along with the Deputy Transport Minister Thavorn Senniam and Deputy Interior Minister Niphon Bunyamanee, held a multi-party discussion yesterday at the Southern Border Provinces Administration Centre in Yala province. The meeting aimed to come up with measures to boost the economy of the five southern provinces.

Jurin said emergency measures still posed a problem when it comes to development in the five provinces. Southern Thailand, particularly the three southern-most provinces near the Malaysian border, have been struggling under the violence caused by a 20 year war with insurgents. More than 6,000 people have been killed in the insurgency.

“We need to tackle the problem on three dimensions – investment, tourism and cross-border trade – which is worth about 230 billion baht.”

He also mentioned that Thailand is still suffering a trade deficit in exports to Malaysia, especially when it comes to rubber products.

“The multi-party meeting aimed to seek solutions to restore and build the basic economy in the five provinces so people have a better life,” Jurin, who is also deputy PM, said.

Meanwhile, Thavorn said that last week he had listened to a briefing from related parties, along with the transport minister and his deputy, and realised that a four-pronged approach will have to be taken with the development of the five provinces. The measures are…

• Developing land transport and increasing both main and secondary transportation routes as well as connections to Malaysia and Singapore in line with the government’s one-belt-one-road strategy;

• Developing water transport by opening three water gateways in the South, that also connect with Malaysia and China as part of the one-belt-one-road strategy;

• Developing rail transport and connecting with other regions;

• Developing air transport in line with the Transport Ministry’s plan to not open any new airports for 10 years, but to develop existing airports in the South, including plans to expand the Narathiwat airport.