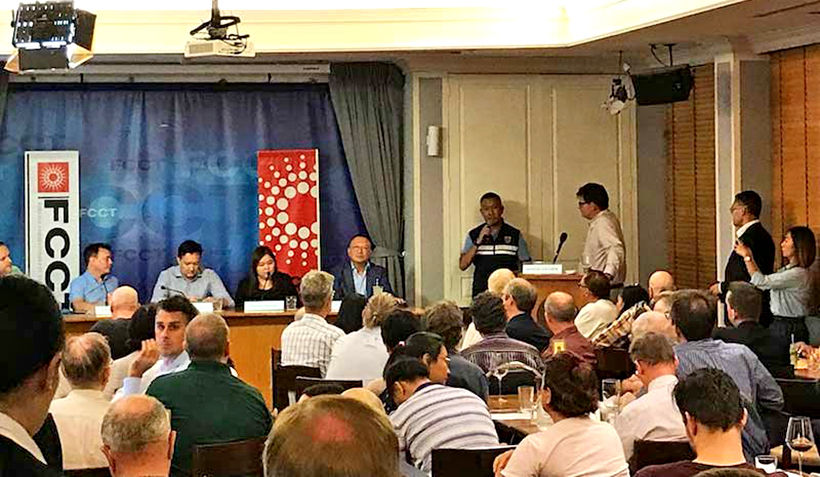 A panel discussion about the controversial TM30 form was held yesterday at the Foreign Correspondents Club in Bangkok.

The panel line-up included Sebastian Brousseau from Isaan Lawyers who has been involved in the recent online petition which called for TM30 to be abolished. Also Richard Barrow, blogger and long-term expat, made a presentation calling for “clarity and consistency” in the enforcement of TM30 around the country. Chris Larkin, director of the Australian Chamber of Commerce and Maj. Gen. Patipat Suban Na Ayudhya, Head of Immigration Division 1 were also on yesterday’s panel.

Invited Immigration Oficer Pol Col. Thatchapong Sarawannangkul had the line of the day in his opening comments about filing a TM30 form saying it was “really not that hard”.

Audible gasps of either faux or real shock were heard around the room.

The officer went on to say that immigration is trying to make it easier for people and urged them to make use of the TM30 website and mobile App. But many in the room complained that people who had registered for the online services were having to wait up to six weeks for a username and password when trying to use the App.

Pol Col. Thatchapong said that some of the delays were put down to “technical problems”, and because some of those people who had registered for the service had not submitted the correct documentation.

He also hammered home the point that the main reasoning behind the TM30 form was “national security and it was needed in order to fight terrorism and other crime”.

Pol Col. Thatchapong stressed that the Immigration Bureau in Thailand is here to help people and that TM30 helps keep people in Thailand safe – including foreigners.

But there were also suggestions how TM30 could be more effective and less inconvenient.

Chris Larkin suggested that immigration should make the pink ID card more accessible to foreigners and that it could potentially be used as a replacement for TM30, TM28 and TM47 (90 day reporting).

Maj. Gen. Patipat Suban Na Ayudhya said the feedback from the event would be passed onto his superiors at Thai Immigration.

Jonathan Fairfield, reporting for ThaiVisa, said that it was good that senior immigration officials were able to attend the event.

“As is often the way with immigration matters in Thailand, I think many people will have left the event with more questions than they got answers regarding TM30.”

“After hearing the comments from the Immigration officials, my own view is that I don’t think TM30 will go away any time soon.”

It is the first time there’s been such a large and organised expat revolt over a single issue in Thailand and the attendance and involvement of Immigration officials has been heartening. But making concrete changes to the enforcement of the TM30 and other ‘pesky’ immigration paperwork is considered unlikely by many long-termers.

If you would like to sign the ongoing petition calling for reform of the TM30, go HERE.

Thailand’s Ministry of Labour is cracking down on foreign teachers who may be working in the Kingdom without valid work permits. The ministry has instructed the Department of Employment to apply stricter criteria when issuing work permits to foreign teachers. According to department figures, Thailand currently has 6,129 foreigners teaching in 922 private and public schools. Of those, 2,667 are from the Philippines, 558 from the UK, 465 from the US, 237 from China, and 160 from South Africa. The remainder are from other countries.

The Bangkok Post reports that authorities discovered 8 foreign teachers not in possession of work permits or working in reserved professions. Of those, 3 failed to notify government employment officials of their employer, place of work, and duties within 15 days of taking up employment. Officials also discovered a school that was hiring foreign teachers without work permits, as well as hiring foreigners to carry out work they were not permitted to do. A further 20 schools are accused of not providing the names, nationalities, and duties performed by foreign teachers within 15 days of them beginning work.

Officials say foreign teachers must be in possession of a non-immigrant visa, not a tourist or transit visa and should apply for a work permit at their local employment office. Foreigners teaching without work permits may face fines of 5,000 – 50,000 baht and deportation. Schools or other academic institutions that hire foreign teachers illegally face fines of between 10,000 and 100,000 baht for each illegal worker, with those responsible also facing potential jail terms.

A 33 year old British man has been arrested on the holiday island of Samui for allegedly firing gunshots from a speedboat while high on drugs. According to a report in the UK’s Daily Mail, Benjamin Robert Simpson, a cryptocurrency trader, allegedly fired a handgun several times, in the direction of the Four Seasons Hotel, where he was a guest. He allegedly fired the gun while on a speedboat with the boat’s driver, Geerati Glinubol, after both men had taken meth.

It’s understood the boat belongs to Simpson, who had hired Geerati as his driver. Simpon originally arrived in the Kingdom as a tourist, but then began trading cryptocurrency. According to Chatchewin Nakmoosik from the local police force, both men took meth before embarking on a speedboat cruise around the island. It’s understood that Simpson then fired several gunshots towards the Four Seasons Hotel, where terrified staff called the police. Police were waiting at the hotel when Simpson returned from his speedboat trip and he was immediately arrested, along with Geerati.

Police say Geerati has confessed to taking drugs with Simpson, telling police that the Briton then bragged about how many guns he had and fired several rounds into the sea, frightening people on nearby beaches. Officer Chatchewin says that in a subsequent search of Simpson’s room, police found a 9mm Beretta pistol and 31 bullets, as well as a revolver with 49 bullets. Officers also seized a plastic bag containing nearly 7 grams of methamphetamine, as well as several meth pipes.

“Hotel staff heard guns being fired so they called the police. They said the gunshots were near the hotel and they were scared. We arrested Benjamin Robert Simpson in the hotel room and found 2 guns and methamphetamine. We put him in handcuffs and kept him at the police station while we investigate and check CCTV.” 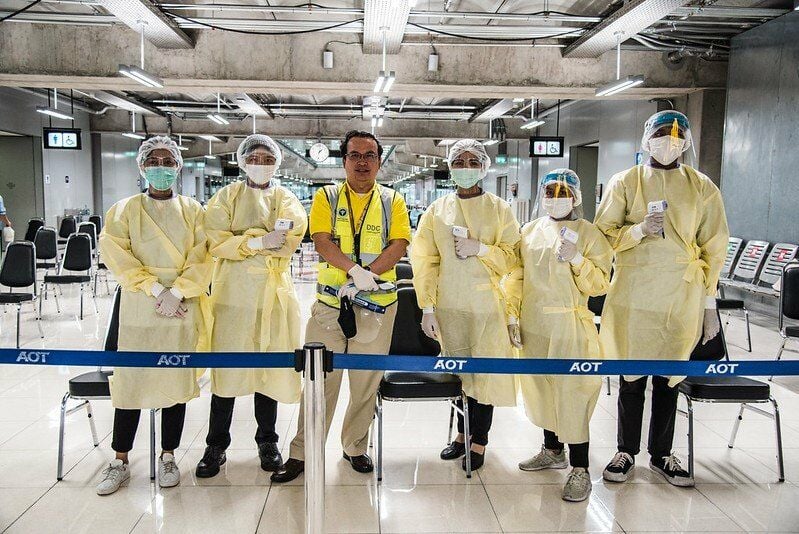 In their latest proposal, Thailand’s Ministry of Public Health will request the CCSA to defer the entry of British visitors to the country after evidence of the faster-spreading B117 strain (aka. the “G strain”) of Covid-19 was found in 4 British travellers arriving in Thailand on December 21.

Over 30 countries have reported cases of the highly-transmissible UK variant of the novel coronavirus, raising fears of increased global spread of the virus, even as countries begin to unroll vaccination programs in the new year, including Singapore and Taiwan. Up to recently, Taiwan has had very few Covid-19 infections.

Vietnam is the latest nation to report a B117 case, which authorities detected in a woman quarantined after recent travel from the UK. Vietnam has banned nearly all international travel, but it is providing repatriation flights for citizens stranded in the UK.

Department of Disease Control announced that all passengers who were on board the same flight as the 4, or anyone who had come into contact with them, has now been located, tested and found to be clear of infection.

The 4 English patients were all from the same family travelling from Kent. The family are now confined to a hospital “and will not be released until medical officials test and clear them of Covid-19 risk”, according to the Centre of Excellence in Clinical Virology at Chulalongkorn University’s Faculty of Medicine.

The Centre’s Dr Yong Poovorawan says they’ve been collecting samples from Covid-19 patients for research and reported that the Covid-19 detected in the 4 British patients are of the B117 strain which is spreading quickly through the UK.