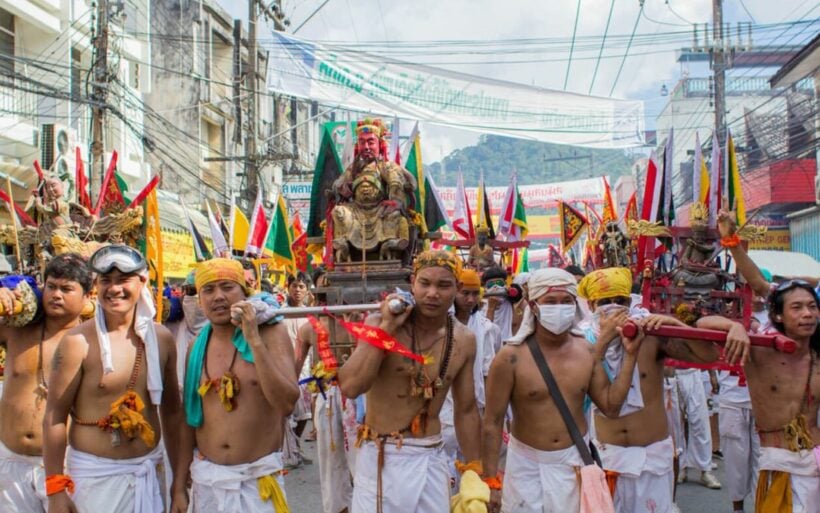 The annual Phuket Vegetarian Festival, aka. ‘Nine Emperor Gods Festival’, always runs during the ninth lunar month. For expats and tourist ‘newbies’ the Vegetarian Festival is a lot to do with parades, firecrackers, bizarre ceremonies and spiritual mystiques piecing themselves, and little to do with vegetarian food.

Whilst we’ve tried to provide a program here, any time schedule at individual shrines is extremely fluid. But typically the ceremonies begin at the temples early morning and then the parades start winding their way through the streets mid to late morning. But, really, they can happen at any time of the day. The spirits appear little concerned with worldly concepts like ‘punctuality’.

The traditions of the annual festival are steeped in ancient Chinese traditions, fused with religious rites and local embellishments. Ask any local Thai-Chinese on the island and you’ll get a hundred different versions of what it all means. Best not to try and understand it – simply appreciate the dedication to the cause, the colour and noise, the baffling and brutal piercings and the most WTF event you’re likely ever see anywhere in the world.

The parades feature the ‘mah song’, a ‘possessed’ man or woman who leads the parade with body piercings that can be from mild to grotesque. Some of the parades are not for kids! These days the parades are trailed by first-aid teams who help some of the mah songs who succumb to their self-inflicted injuries and other devotees who get too close to the fireworks. Occupational health and safety is NOT a big feature of the annual celebrations.

In the wake of the passing parade is the stench of acrid fireworks smoke, red firecracker casings, bits of food, often blood and colourful flags that just get trampled in the frenzy. 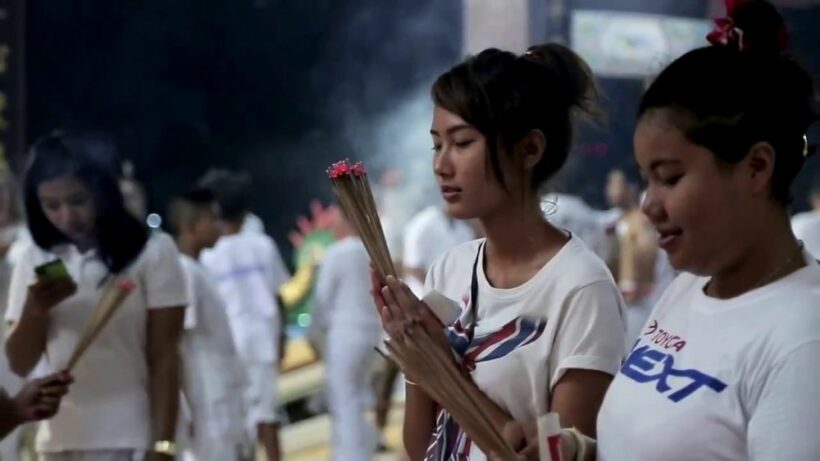 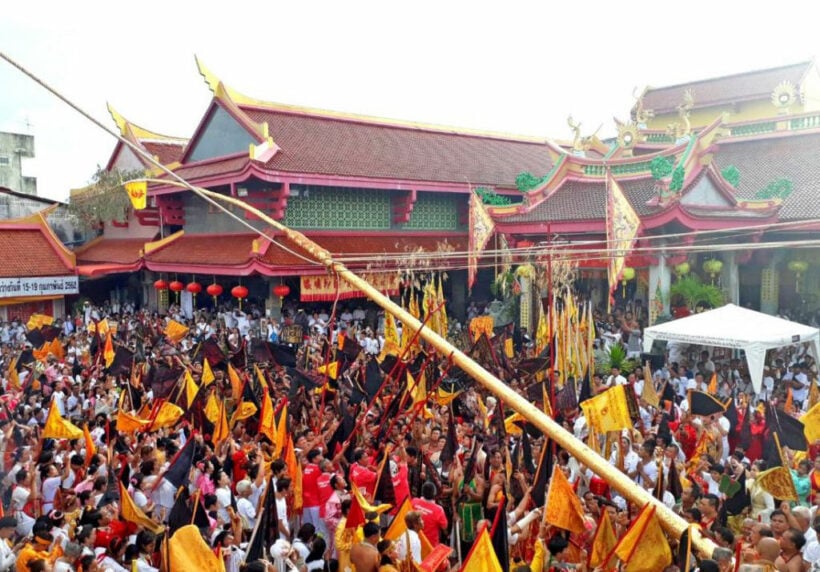 Phuket was a popular trading port for the Chinese over four centuries so that half of the island’s residents are descendents of Thai/Chinese families. Whilst the annual parades, ceremonies and fire-walking displays are just an annual fixture for the locals, they are are an eye-popping week of sensory overload for newcomers to the week of traditions.

Whilst the Vegetarian Festival is celebrated in other parts of Thailand its focus is Phuket where Chinese tourists flock to enjoy the event, along with an increasingly curious bloc of western tourists.

On a typical day during the festival, devotees assemble at Chinese shrines – there are many around the island. There are food stalls lining the streets near the shrines where you can buy any number of vegetarian dishes. Usually it’s just lots of noodles with a few vegetables thrown in, tofu, stir fried and served on a plastic plate. There are hundreds of dishes but they all taste much the same.

The ‘vegetarian’ aspect of the festival is to ‘cleanse’ your body of evil spirits and eat a vegetarian-only diet for the ten days each year. Local cows and chickens rejoice as many locals do indeed go ‘veggie’ for the term of the celebration – some even keep it going until the end of the month.

The festival main event kicks off the ten days of celebrations (tonight), with everyone dressed in white gathered at their local shrine. A giant bamboo pole will be raised, meant to invite divinities to come down to earth. The mah songs wear bright and highly ornate outfits – the rest of us wear white. It you don’t have anything white be assured there are hundreds of shops you can get a ‘vegetarian festival-appropriate’ costume. 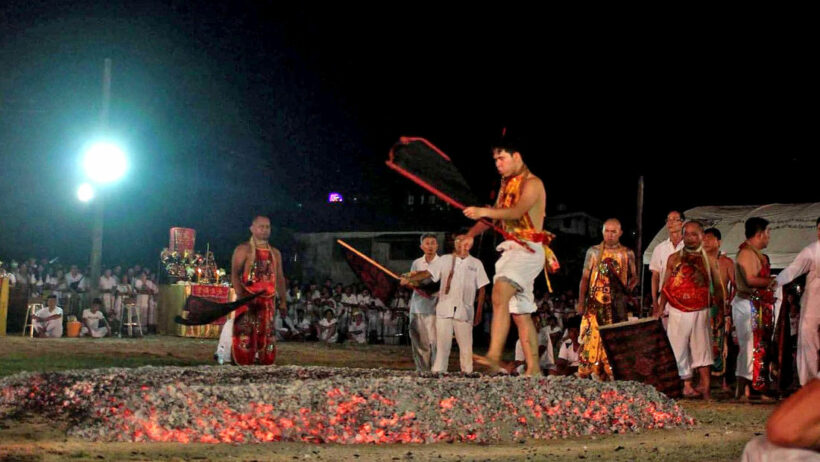 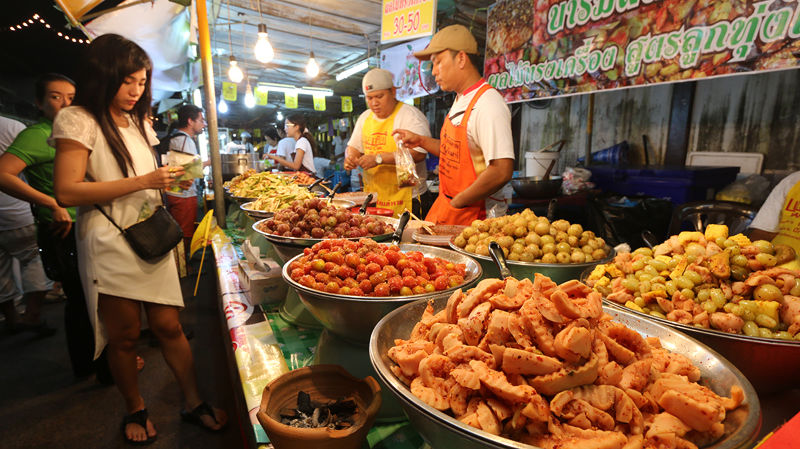 Devotees will follow the main rules for the week – mostly wear white, won’t eat meat, won’t drink alcohol, won’t have sex. Women having periods should not attend events or even watch the festival, according to the beliefs.

Each day of the Phuket Vegetarian Festival, processions start from one of the leading shrines around the island. Locals will flock to the temples in a chaotic crowd trying to get close to the mah song or even a selfie.

From early morning, the mah song will enter a trance at their favourite shrine and pierce their cheeks with, well, just about anything they can poke through their cheeks. Spikes, swords, car parts, tools, petrol nozzles… as the years pass the more excessive and grotesque the display of human piercing.

The procession will then wind their way through the streets. You’ll know they’re coming – traffic will be stopped and the mah songs and white-clad devotees will travel from one shrine to another. Locals (the Thai-Chinese anyway), will prepare food offerings on small tables outside their homes and shops, receive blessings from the mah song and suffer the deafening noise as the parade passes by.

Firecrackers get thrown around, all elements of safety or crowd control completely vanish and a good time is had by all – usually.

The mah songs say they are possessed by ancient spirits for the period of the parades and claim they suffer no pain when the articles are pierced through their cheeks. Spirits, good drugs or just hocus-pocus, the mah songs are the main player in the absorbing marches that are the feature of the parades all over the island. There are also fire-walking displays later in the week where devotees (and usually a few drunk tourists who would be advised not to try!) walk across red hot coals to display their protection from being burned by the ‘spirits’.

Whilst events may pop up anywhere around the island, the main focus is Phuket Town and Kathu where most of the Chinese shrines and temples are located. 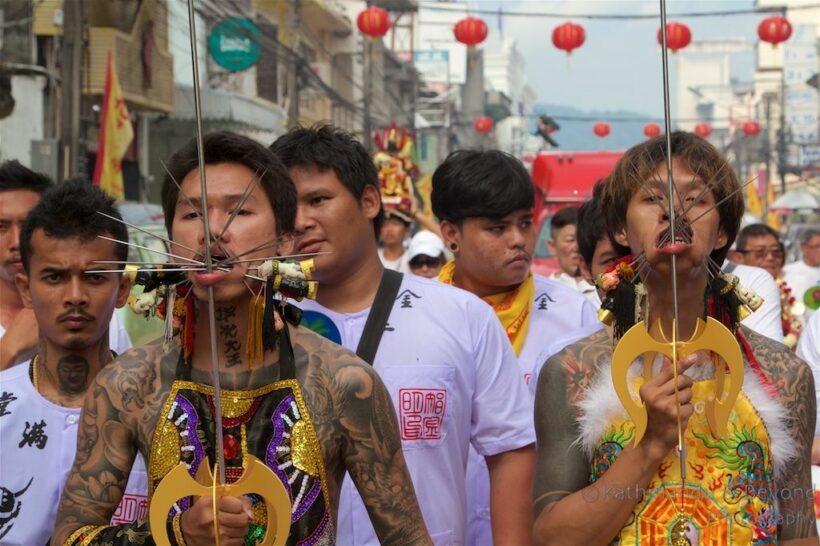 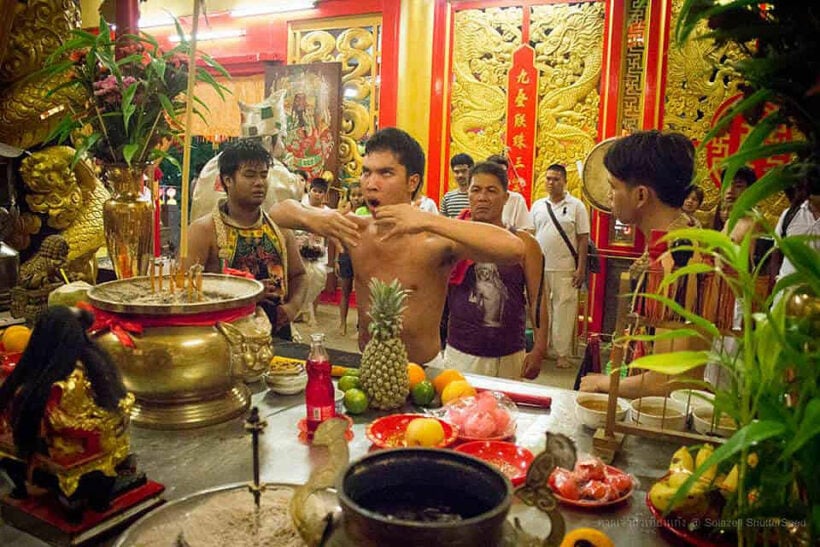 Activities for this year’s Vegetarian Festival

• Closing of the Vegetarian Festival 2019. 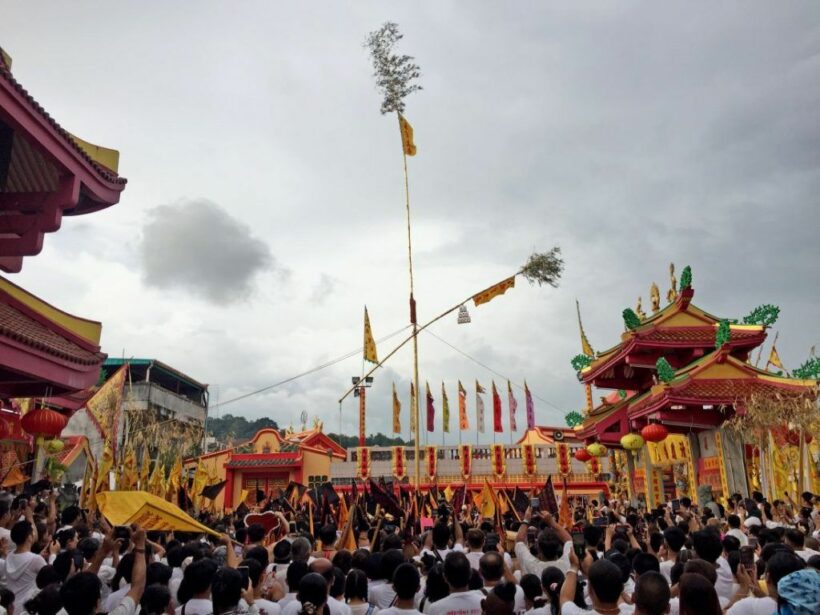 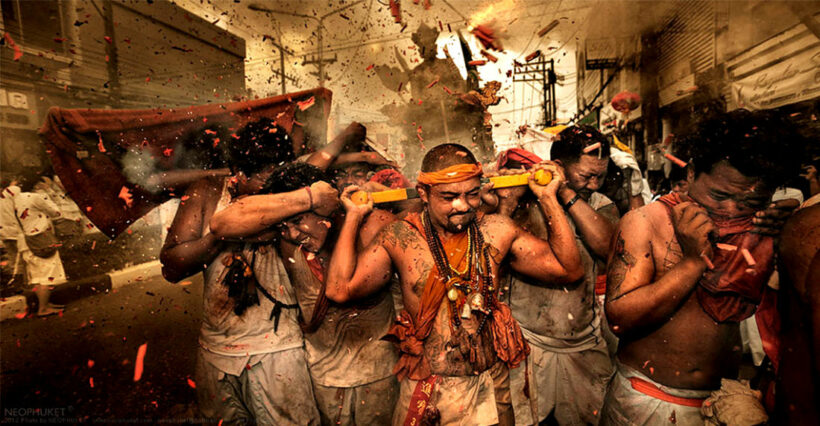 OPINION: Phuket’s Vegetarian Festival is now for the tourists, not the locals