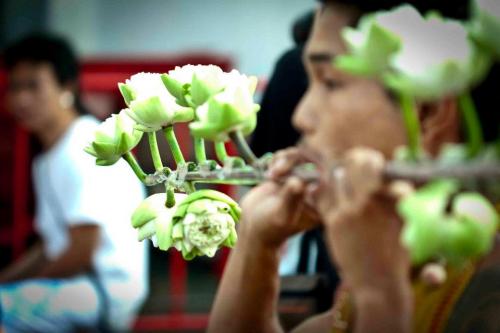 PHUKET: Final preparations are underway as the annual Phuket Vegetarian Festival draws closer. This year the festival will start on October 5. According to tradition, it will continue for nine days and draw to a close on October 13.

Director of the Tourism Authority of Thailand Phuket Office, Mr Chanchai Doungjit said: “This year we expect an influx of tourists from neighboring countries like Malaysia, Singapore, as well as from mainland China, Hong Kong, Australia and Russia to attend the festival.”

The TAT director expects over 100,000 tourists to visit Phuket Town during the vegetarian festival, generating more than 600 million baht in revenue for the local economy. Although the festivities will most likely be liveliest in Phuket Town, neighboring provinces, such as Krabi, Phang-Nga, Trang and Ranong will also benefit from the tourism influx.

“I think we are very well prepared this year. The TAT has worked really hard to promote the event within the country and abroad, several months in advance,” Mr Chanchai said.

“Different government organizations, such as the Phuket City Municipality and the provincial police will also work together to ensure the safety of all participants. Although there is no definite budget that we set each year for the Phuket Vegetarian Festival, all relevant government organizations will combine their efforts to ensure food hygiene and crowd safety. The provincial police will also be vigilant against illegal fireworks.

“Over 20 Chinese temples will be involved in the festival this year. And the TAT has a guide book for this festival which includes full details of the events, which you can get at the TAT office in Phuket Town,” he added.

Phuket Vegetarian Festival, or “jia chai” in local Hokkien Chinese, began in 1825, when the governor of Thalang, Praya Jerm, moved the island’s principal town from Ta Reua in Thalang District to Get-Hoe in Kathu District, where there was many tin mines and Chinese miners working them. Kathu was then still covered by jungle and fever was rife. It happened that a traveling opera company (called ngiu in Thai or pua-hee in Hokkien dialect) came from China to perform for the miners.

When the whole company grew sick from an unnamed malady, they kept to a vegetarian diet to honor two of the emperor gods Kiew Ong Tai Teh and Yok Ong Sone Teh. The sickness afflicting the opera troupe then disappeared. This greatly interested the people of Kathu, who asked how it was done. The answer came that ritual vegetarianism with its attendant ceremonies had been the remedy, and as a result, people embraced the faith enthusiastically.

Over the years, the simple practice of devotion grew into a vibrant festival held every year in Phuket. Today the Phuket Vegetarian Festival draws visitors from all over the world. The multitude of stalls selling vegan food, the lively parades, the ear shattering fireworks, as well as the gut wrenching self-mutilation performed by scores of possessed Ma-song are all familiar sights of the vegetarian festival. This year will most likely be no different.

Ma Song, or entranced horses, are devotees whom the gods enter during the fest. They manifest supernatural powers and perform self-torture in order to shift evil from individuals onto themselves, and to bring the community good luck. Ma Song fall into two categories: those who, having had an intimation of impending doom, want to extend their lives; and people specially chosen by the gods for their moral qualities.

Throughout the festival, fireworks and drums are sounded, especially during ceremonies. It is believed that the louder they are the better, because the noise drives away evil spirits.

Participants in the festival keep to a strict vegan diet for a varying number of days, usually no less than three. This they do to make themselves strong in mind and body; they refrain from all vice, eating animal flesh, and killing animals. The festival thus promotes good hygiene, brightness and inner peace.

10 Rules for the vegetarian festival

For more on the Vegetarian Festival see Phuket Today, broadcast locally on PC, RC and KDTV cable networks, nationally on TrueVision 85 and 59, GMMZ and PSI, and internationally to over 100 countries around the region. For full schedule click here.

Looking Back: The spirits that guard the city