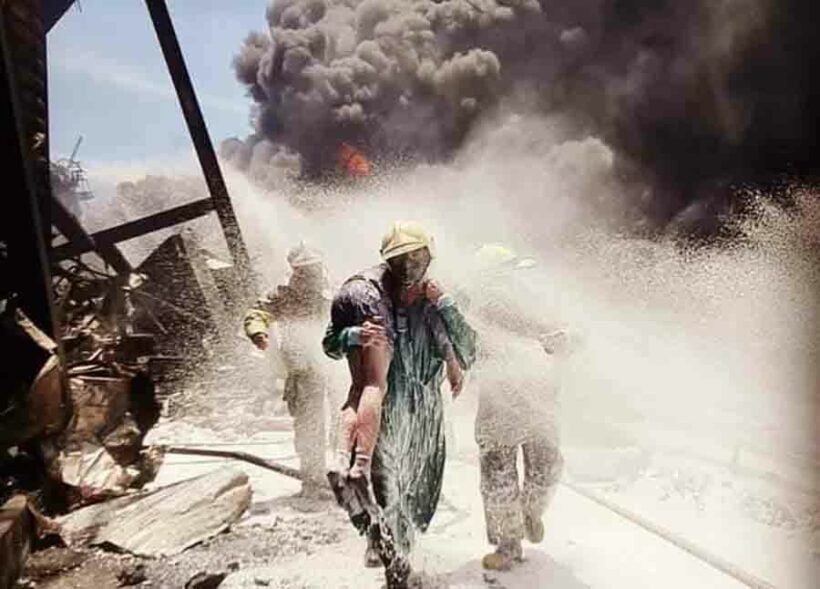 The Pollution Control Department has confirmed that residents within 2 – 5 kilometres of a factory that burnt down in the central province of Samut Prakan can now return home. The air quality in the surrounding area has been tested and deemed safe. However, a number of environmental concerns remain.

According to a Bangkok Post report, governor Wanchai Kongkasem says talks are ongoing between officials, the PCD, the Department of Disaster Prevention and Mitigation, and petroleum giant, PTT. Concerns have been raised over an industrial chemical known as styrene monomer, which has been found in tanks in the area. In addition, Environment Minister Varawut Silpa-archa has raised the issue of contaminated water being absorbed into the soil and has called for checks on water sources above and below ground, with 12 kilometres of the site of the fire.

The Bangkok Post reports that the Royal Irrigation Department is being ordered to close all canal floodgates in nearby areas, in a bid to limit the impact. Environmentalist Sonthi Kotchawat has called for urgent action to contain any pollution, pointing out that styrene monomer is highly toxic to humans and the environment.

According to Sonthi, the biggest health risk aside from contaminated air, is the danger of toxic chemicals in water. He points out that rainwater can drive leaked chemicals from the site of the fire into nearby waterways. In addition, rain mixes with contamination in the air, leading to acid rain.

“Styrene is a hazardous substance. It can destroy the ecosystem and cause cancer, so the PCD needs to act quickly to decontaminate the area.”

gummy
1 hour ago, Thaiger said: The Pollution Control Department has confirmed that residents within 2 – 5 kilometres of a factory that burnt down in the central province of Samut Prakan can now return home. The air quality in the…
HolyCowCm
I have flown into that airport there literally hundreds + of times. That area has produce and rice grown and if remember maybe some aquaculture, and the soil and the pond water there surely will be polluted. But might be a…
PatrickSatoLee
perhaps after this incident the Thai Government will give more serious consideration to Zoning Laws, keep residential and industrial areas apart, further apart.

Lockdown not out of the question: CCSA