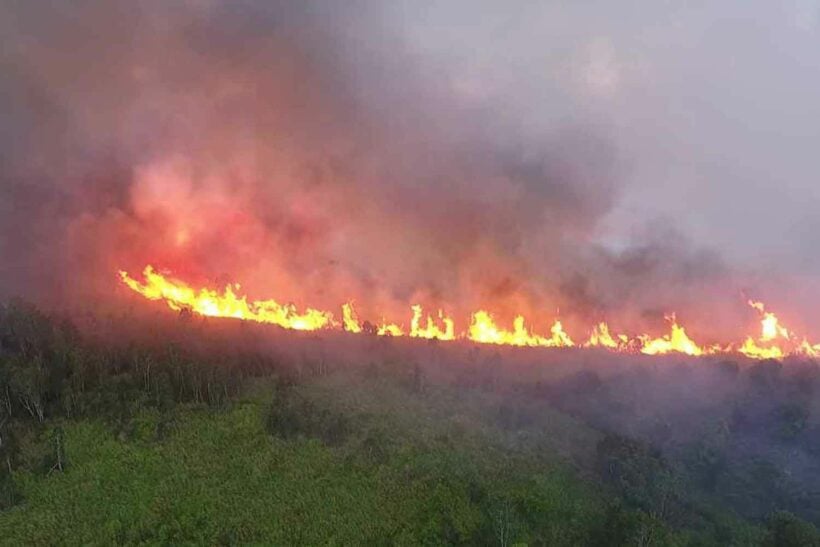 Despite prohibitions on agricultural burning, wildfires continued ravaging forests across Thailand yesterday, especially in the North. Satellite images charting the progress of large fires yesterday morning showed the number of hotspots in the north had risen from 823 on Friday to 1,334. A total of 3,238 forest fires were recorded nationwide.

Mae Hong Son province had the highest number of large-scale blazes with 340, followed by Uthai Thani in the central region (209) and Tak (205), also in the north. The Pollution Control Department’s air monitoring stations showed the overall level of PM2.5 pollution in Mae Hong Son rose to 96 microgrammes per cubic metre, nearly double Thailand’s “safe” threshold of 50µg/m³. The threshold set by the World Health Organisation is 25µg/m³

Also hard-hit was Lampang province, where fires continued ravaging national park and wildlife sanctuary areas. Lampang’s provincial governor says that despite the fires, levels of PM2.5 have remained normal there, but he expects them to rise again in the coming week. Officials of the Doi Pha Mueang Wildlife Sanctuary in Lampang say the fires  wiped out 13 rai of forest in a single day, including seven rai of in conservation areas of Tham Pha Thai National Park.

Meanwhile, the director-general of the Department of Disaster Prevention and Mitigation said yesterday two helicopters were deployed to battle fires in inaccessible mountain areas in Lampang, Chiang Mai and Phrae provinces.