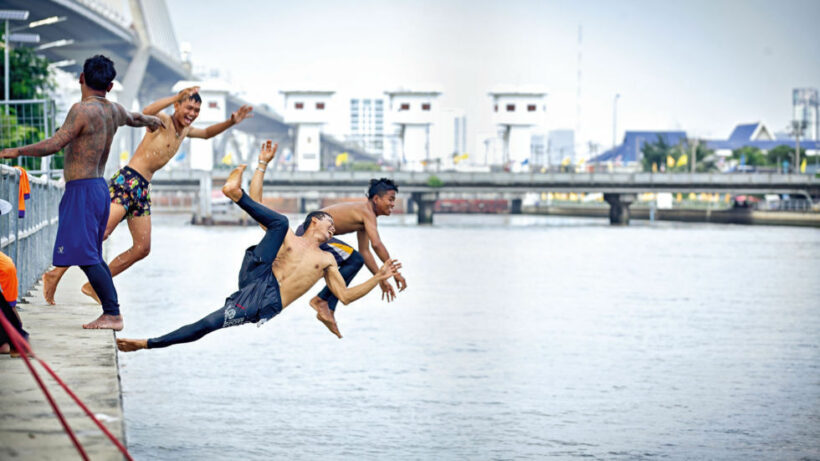 Need some extra cash? Catch someone dumping garbage into Bangkok canals and half the money in fines will go to you. The effort is to clean up the so-called “Venice of East” which has so much trash, city officials say it’s scary. The maximum fine is 10,000 baht, so potentially you could get up to 5,000 baht for one report.

To entice people to get involved in the reporting effect, a graphic was made from the Thai movie poster “Ghost House,” replacing the spirit house hanging from a ghostly hand with a excavator claw picking up garbage.

City spokesperson Pongsakorn Kwanmuang posted the graphic on Facebook, asking people to keep an eye out and report on anyone they see littering. He warns that mass amounts of litter can cause flooding, adding that it’s “very scary.”

Those reporting on littering incidents need take photos and videos as evidence. If the report doesn’t lead to a fine, the reporter doesn’t get paid. In the first day there weren’t any reports but the hotline is ready and raring to go..

“The case will be sent to the local district office which will contact the person reporting it later to see if they will get the reward.” 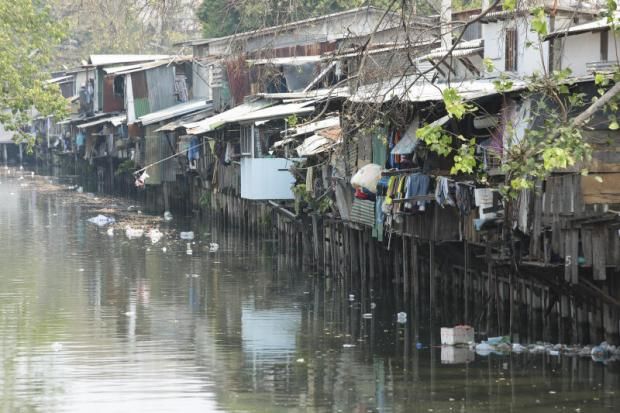 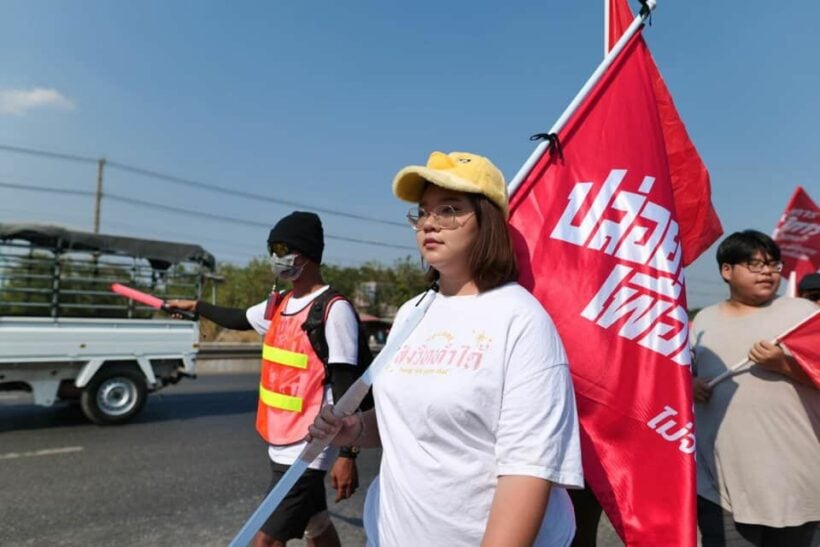 Protest leader Panusaya Sithijirawattanakul, aka “Rung”, has been hit with a fine of nearly 6 million baht, after removing plants at Bangkok’s Democracy Monument. Panusaya and 5 other activists have been charged with removing plants placed as decoration around the monument, during a political rally on February 13.

She says Samran Rat police station has ordered her to pay 5.9 million baht as a result of the action. She has also been charged with violation of the emergency decree and various disease control measures. In addition, she faces the serious charge of lèse majesté, following her role in a September 19 rally at the public square of Sanam Luang in Bangkok.

The Democracy Monument rally on February 13 was organised by the People’s Movement, calling for the release of 4 fellow activists. According to a Bangkok Post report, the plants were removed to make way for the rally. Another prominent pro-democracy activist, Panupong Jadnok, aka “Mike Rayong” accuses officials of deliberately planting the trees to create an obstruction. The rally ended in skirmishes with police at the Supreme Court, near Sanam Luang. Protesters were attempting to reach the Bangkok Pillar Shrine, but had their passage blocked by police.

Meanwhile, over the weekend, the government banned mass gatherings, including political protests, ostensibly due to Covid-19 fears. The law has been published in the Royal Gazette, coming into effect on Saturday. However, activists from the People Go network defied the law over the weekend, gathering in protest at the Democracy Monument and calling for the release of the 4 activists held on lèse majesté charges. 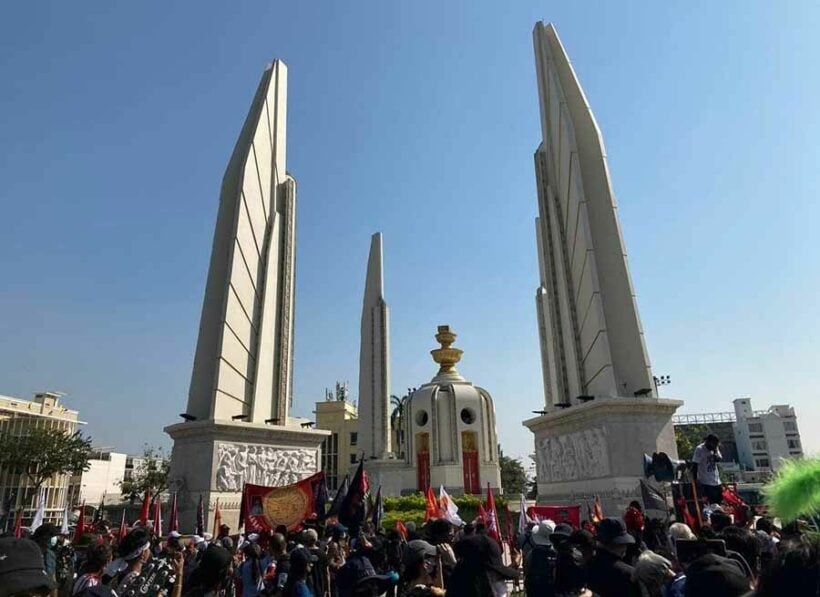 Ignoring a police warning not to violate the emergency decree, pro-democracy activists gathered in their hundreds at Bangkok’s Democracy Monument yesterday. Although the anti-government protests have kicked off again after a 2 month hiatus, the numbers are well down on last years crowds, now measuring more in the hundreds than the thousands.

The Bangkok Post reports that members of the People Go network came together to call for 4 fellow activists to be released from Bangkok Remand Prison. The 4… Anon Nampa, Parit Chiwarak (aka. Penguin), Somyos Prueksakasemsuk, and Patiwat Saraiyaem… are being held on charges of violating section 112 of the Criminal Code (more commonly known as lèse majesté – criticising members of the Thai royal family). All 4 have been denied bail.

Officers from Samran Rat and Songkhram police stations issued statements to say the rally was in violation of the emergency decree. On Saturday, the government used the all-encompassing Covid-19 umbrella to issue a ban on political rallies across 6 provinces, including Bangkok.

Activist Jatupat Boonpattararaksa, aka, Pai Dao Din, ignored a police order for the rally to disperse and proceeded with setting up a stage at the Democracy Monument. He also gave assurances that the gathering would remain peaceful.

“We are not fighting the police deployed in front of us. We are fighting against dictatorship.”

Activists had walked 250 kilometres, from the north-eastern province of Nakhon Ratchasima (also known as Korat), reaching Bangkok’s Kasetsart University on Saturday. Yesterday, they ended their mammoth trek with a walk to the Democracy Monument. 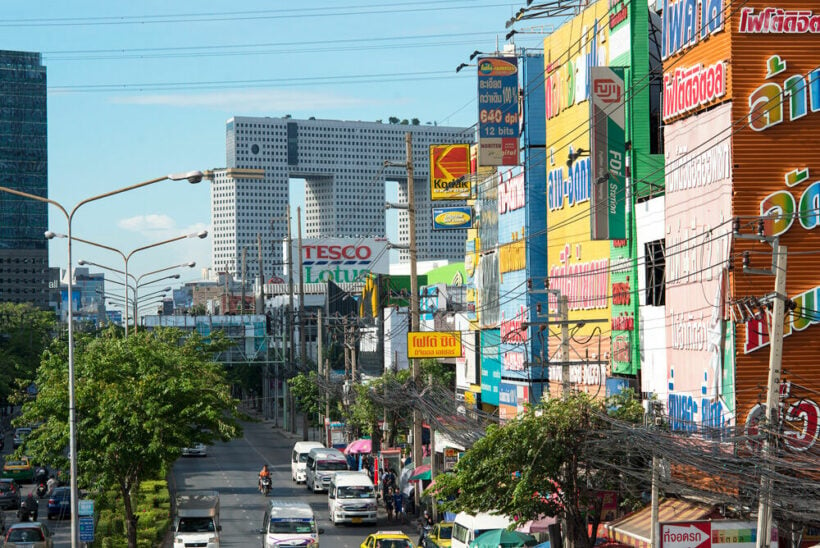 The Metropolitan Police Commissioner says he is most concerned about the Lat Phrao intersection, due to the Redem or Restart Democracy group planning to hold a leaderless protest, which has been prone to violence in the past as demonstrated last Sunday. The group is an offset of the Free Youth movement, which is one of the main groups that have been demonstrating against the military-backed government.

The Redem protesters plan to march from the Lat Phrao intersection to the Criminal Court on Ratchadapisek Road, despite a law announced in the Royal Gazette last night which banned protests, mass gatherings and assemblies. The law stated the reasoning was not political, citing fears over Covid-19 instead.

The newly announced law would give the government a wider range of power in enforcing such public gatherings, with law-breakers being subjected to up to a 40,000 baht fine or up to 2 years in jail. The Redem group is expected to demand the release of core Ratsadon leaders and others being held in jail without bail.

The Ratsadon group reached the outskirts of Bangkok yesterday, after a nearly 250 kilometre-long march from the Thao Suranaree statue in Korat province’s Muang district province. But they were met by police who tried to prevent them from marching further into Bangkok, but eventually allowed them to keep marching until they reached the Kasetsart intersection. The group is expected to end the march tomorrow, at Democracy Monument.

Despite the groups’ plans to ignore the recent law that bans protests, police have warned that they will face charges if they defy the new order. 32 companies of anti-riot police have been placed on standby in light of the expected protests taking place in Thailand’s capital today.

Updates on international travel to Thailand