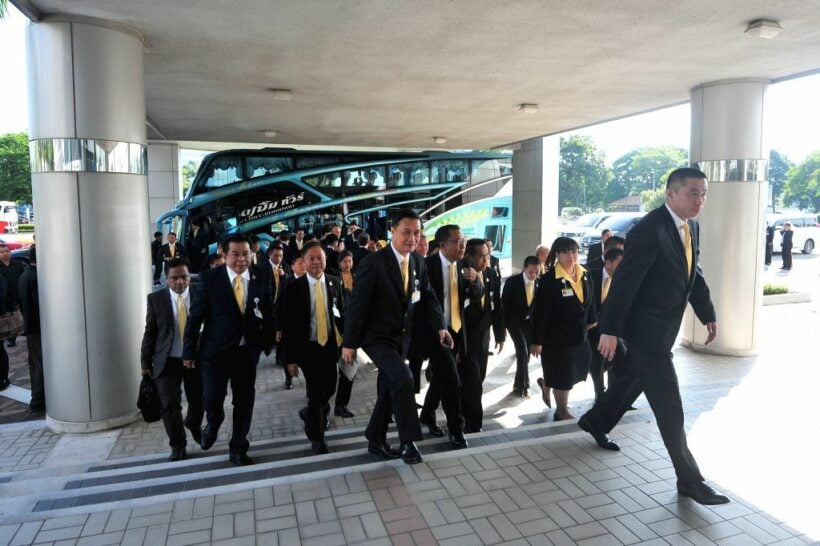 It took most of two days for the new parliament to elect a House Speaker and two deputies. All votes, after much prevarication, won by slender margins. The Palang Pracharat Party is emerging as the party with the numbers but there are tough times ahead for any government as the votes have not been falling uniformly and the ‘swing’ parties – Democrats and BumjaiThai – are yet to throw their weight formally behind any of the main blocs.

The vote for speaker showed that Phalang Pracharat had won over the key undecided parties – Democrat and Bhumjaithai – for these votes anyway, and was poised to lead the coalition.

The next administration, which would need maximum votes in the lower house to progress policy, will face hurdles at every step. There is no guarantee that the swing parties will support Palang Pracharat on every issue, in fact, it’s unlikely.

Though the lower house speaker and deputy speaker positions went to Phalang Pracharat-backed figures, giving it the upper hand in Parliament, the wins were narrow and indicated possible future swings.

But in the vote for the position of first deputy speaker, veteran politician Suchart Tancharoen defeated first-time MP Yaowalak Wongpraparat from the fledgling Future Forward Party by just two votes (248-246).  That’s a significant result for a new party and their first foray into Thai parliamentary politics.

A Future Forward MP has also won the bi-election held over the weekend in Chiang Mai, giving them one more PM vote in the lower house.

The second deputy speaker’s post went to Supachai Phosu, who secured 256 votes against 239 for Seri Ruamthai candidate Prasong Buranapong. In such a tight situation, smaller parties that would back the Phalang Pracharat-led coalition are seen to have a significant leverage over the pro-junta party.

The Democrats and Bhumjaithai, who together have 103 MPs, look likely to gain a fair share of Cabinet portfolios.

The hiccups in the vote for speaker on Saturday could portend Phalang Pracharat’s fate in the lower house.

Suchart reportedly was to run for speaker, but Phalang Pracharat had to nominate Chuan at the last minute, leading to some discontent among pro-junta MPs.

Apparently, in a struggle to overcome internal disagreement, the pro-junta bloc motioned for postponement of the speaker’s election but failed when some pro-Suchart MPs voted against the move.

Aside from such internal challenges, it was also observed that the pro-junta camp would face strong opposition from Pheu Thai and Future Forward.

The elections of all speakers was expected to be completed in a single day, but the process dragged out to two full days, partly because the rival blocs locked horns and neither was prepared to give way.

The ‘caretaker’ speaker Chai Chidchob had to adjourn the meeting a couple of times when they refused to back down. Starting from when Phalang Pracharat attempted to postpone the election of the house speaker on Saturday, the two blocs debated for nearly two hours before Chai called a break.

Phalang Pracharat finally gave in and agreed that the chamber could vote to decide whether or not to defer the election.

The election on Saturday took more than eight hours and two other motions to elect the first and second deputy speakers were put off to yesterday.

Yesterday morning, Future Forward motioned for the candidates to give a “vision speech” before the vote, seeking to establish the credentials of its candidate, Yaowalak. But Chai, a highly experienced house speaker aligned with Phalang Pracharat, abruptly dismissed the proposal after the heated |atmosphere showed signs of worsening.

More wrangling followed, especially during the vote to choose the second deputy speaker. Pheu Thai MPs led by Cholnan Srikaew protested over ballots that bore an erroneous surname for the candidate. They also asked Chai to stop the referee from recording the vote count on video.

The MPs said the manner of the recording was suspicious and questioned whether the ballots had been marked to indicate the identities of the voters in order to secure “rewards” later on.

Chai disagreed with both motions despite heated debate and ordered the process to continue.

HM The King acknowledges the passing of General Prem