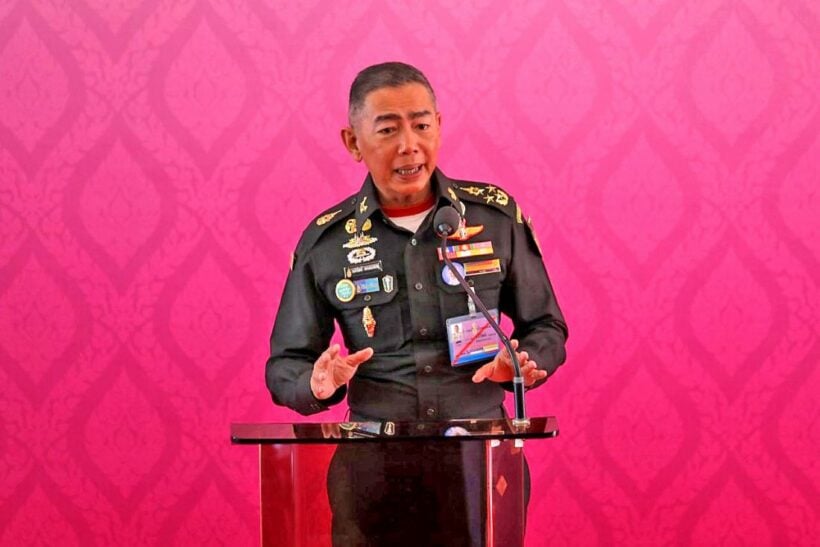 “Those who graduated from abroad shouldn’t bring extreme leftist ideology to topple the Thai democratic regime with the monarchy as head of state,” Apirat said at a press conference held to mark the 112th anniversary of the First Infantry Division.“Students, scholars and even government officials, no matter where you graduated from, should bear in mind that democracy needs to be adjusted in line with local culture and norms.”

“We are Thai and this is Thai democracy. You have to adapt what you have learned to fit within our country. Thai democracy is the notion of Thais love Thais, and we are united.”

Though the Army chief did not mention any group, he was clearly referring to comments posted on social media – a weapon that he admits is more powerful than military hardware – that labelled one political group as a democratic force and the junta as dictator.

The Army chief called on all parties to accept the rules set and enforced by the Election Commission.

“Like a football match, if a team loses, the fans have to accept defeat too,” he said.

“The connotation of democracy versus dictatorship is a political discourse created to divide voters,” he said implying that a six-party coalition led by Pheu Thai, calling themselves the pro-democracy camp, are competing with the pro-junta Phalang Pracharat Party to form a government.

“Let me ask if the NCPO is a dictator? Is our work over the past five years that of a dictatorship?” asked Apirat, who is also the NCPO secretary-general.

Hence, he said, instead of denouncing people’s demand to end military dictatorship, the Army chief should take his troops back to the barracks and end all forms of meddling in politics.

“The right way to ensure stability and reconciliation is to respect differences and peaceful coexistence in society, not repression and prosecution of dissenting voices. That is why the military needs to give power back to the people and return the country to democratic civilian rule,” Sunai told The Nation.

Paul Chambers, an expert on military affairs from Naresuan University, said Apirat’s comments were clearly directed at the Future Forward Party, as he detests the party because of its anti-military standpoint and political reformist nature.

The Future Forward’s secretary-general, Piyabutr Saengkanokkul, who graduated in law from France, is in the hot seat as ultra-rightists are accusing him of championing an anti-monarchist ideology with the intention of toppling the institution of monarchy.

Many have twisted Piyabutr’s lecture on the role of monarchy in the justice system, painting the scholar-turned-politician as a threat to the monarchy.

Meanwhile, former Thammasat rector and prominent historian Charnvit Kasetsiri used the Thai proverb “iron loses its strength when it rusts inside” as a metaphor to warn people that sometimes one ends up destroying what they want to preserve.

“The administration of the ancient Ayutthaya kingdom had collapsed from inside long before the Burmese came and toppled it,” he warned.

Is Thanathorn the new Thaksin? Will the ‘establishment’ tolerate his new political vision?