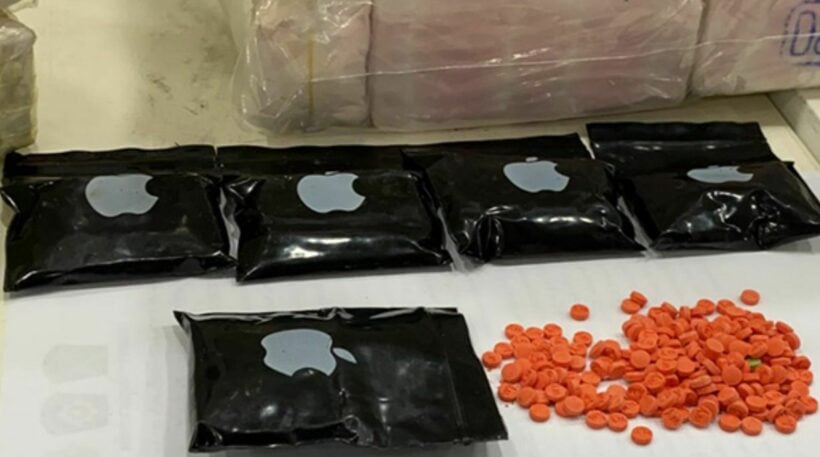 2 drug busts over the last few days in Hat Yai and Bang Klam netted over three-quarters of a million methamphetamine pills and over 5 kilogrammes of crystal meth. Police in Songkhla had been conducting surveillance in order to uncover both suspected drug dealers before carrying out the raids that found 882,000 meth pills.

On September 13, police arrested a 31 year old in Hat Yai who was in possession of 5.6 kilogrammes of crystal meth and an additional 282,000 meth pills. The police confiscated the drugs as well as a Honda car and 18 other articles that they took into evidence.

In the second of the 2 busts, police in Bang Klam arrested a man who claimed to be merely holding packages of meth pills for an unidentified drug dealer. They found in his house 600,000 meth pills in what appears to be Apple packaging bags.

The 48 year old man said that he had been contacted on the LINE app by an anonymous man who requested to send him packages he would hold on to until clients came to pick them up. The packages were sent via private delivery service and, after receiving them, the man would call the clients to come to pick up the meth packages.

The man in the second of the busts confessed to having been the middleman in deliveries at least 10 times already and told police that he received 2,000 baht each time client picked up their parcel of meth pills.

Both of the suspects in the two separate drug busts were charged with possession of drugs with the intent to sell.

Paco
First of all I am very against drugs but to put your freedom at risk for 2000 baht, you have to be a moron

gummy
1 minute ago, Paco said: First of all I am very against drugs but to put your freedom at risk for 2000 baht, you have to be a moron I agree but for so many these are financially very desperate…
Paco
2000 baht sentenced 15+ years in jail probably = rent free
BJoe
Would like to know more about the so-called “death penalty”  in conjunction with drug trafficking. How many actual executions have been conducted over the past 5 years. Maybe it’s just falangs perception but it seems that political offense bears a…