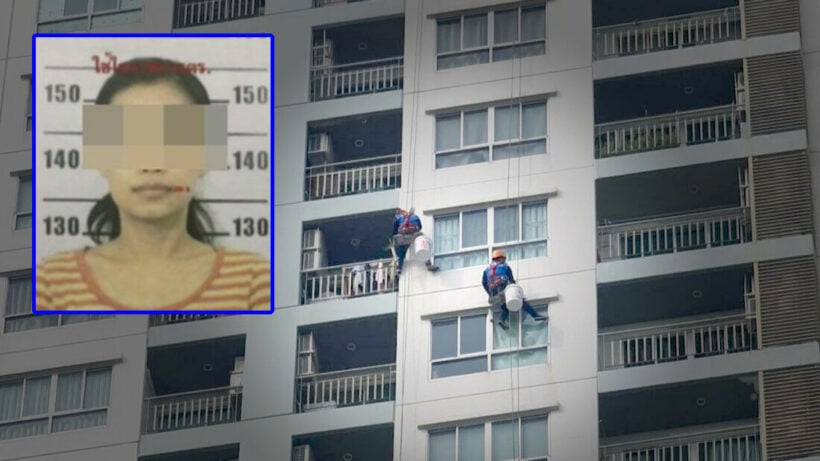 PHOTO: The woman who cut the rope on condo workers said she was just annoyed by their presence. (via Daily News)

People have been shocked with the continuing story of workers doing repairs on the outside of a condo building in Nonthaburi on October 12 when their safety ropes were cut, leaving them dangling 26 floors above the street below until they were luckily rescued. Now the woman who stands accused of cutting the rope of the workers has allegedly confessed and offered a feeble excuse as to why she did it.

The worker whose life was at risk had said that he saw a well-dressed woman reach out the window several stories below and cut the line, stranding the 2 Burmese workers who were then unable to raise themselves to the roof or lower themselves to the street below safely. Luckily a couple on the 26th floor spotted the dangling workers, who opened their doors and helped them in.

Police announced just 2 days later that they had enough evidence to try the woman accused of cutting the rope that left the workers dangling after doing a forensic investigation on the rope.

The woman at first denied any involvement in the crime, but police presented her with forensic evidence, witness accounts, and CCTV footage, all that allegedly implicated her as the culprit.

She then allegedly confessed and said that the reason she committed the crime that could have killed the Burmese workers was simple: she was annoyed by the workers outside her window.

She said that the condo’s management had failed to notify her of the maintenance work and that when she saw 2 men hanging outside her window it scared her and disturbed her. Apparently, she cut the rope out of annoyance at the inconvenience of the workers outside her window.

She has now been charged with causing the loss of assets as well as attempted murder.