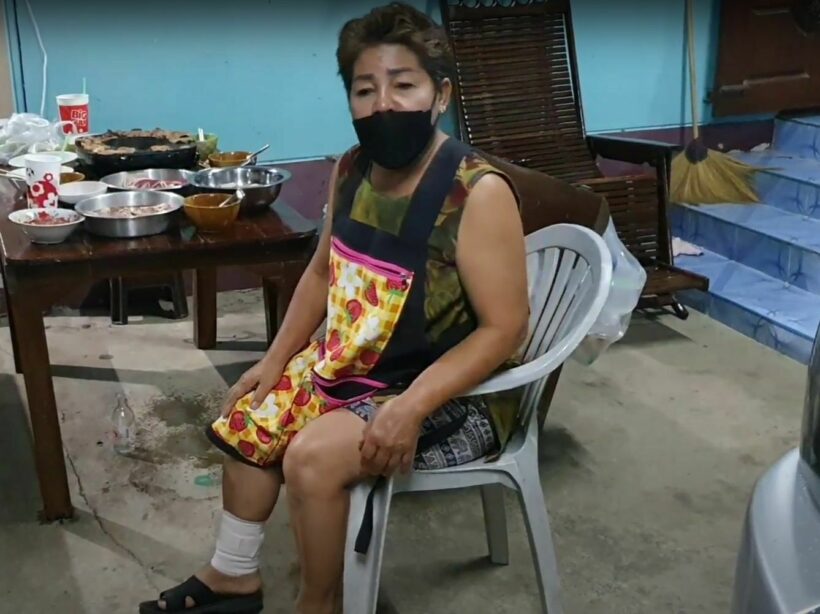 PHOTO: A woman shot by stray bullet in a motorcycle shootout. (via Prasit Tangprasert screencap)

A 58 year old woman in Nakhon Ratchasima was shot by stray gunfire while eating in front of her house as a motorbike shootout occurred in front of her. Her son-in-law in his pickup truck was being pursued by the two armed motorcyclists when she got caught in the crossfire during the incident that occurred on Thursday night in the Khong district.

The woman’s son-in-law said he was driving his pickup truck to her house when two men on motorcycles claimed that he had cut them off started following his truck and shouting abuse at him. He assumed it was random road rage and ignored them, continuing on to the house where his mother-in-law and other family members were eating barbecue pork in their front yard.

The motorcycles followed him home and then had driven about 150 meters past the house when they stopped. From that distance, the son-in-law could see one man remove something from under his motorbike seat but didn’t realize that it was a gun until he heard the gunfire.

His mother-in-law was hit in the right leg by the stray bullet from their gunshot and, after the incident, the two men immediately jumped on their motorbikes and fled the scene.

Police are investigating the incident and are attempting to track down the two men that opened fire on the family by using video footage from cameras around the area. After interviewing several witnesses they believe they may have an idea of who the shooter was and said that it may be someone who is previously jailed on a weapons offence and I just recently been released.

Meanwhile, the woman who was shot with the stray bullet was immediately rushed to the hospital for treatment for the leg wound. There is no updated information on her condition at this time.