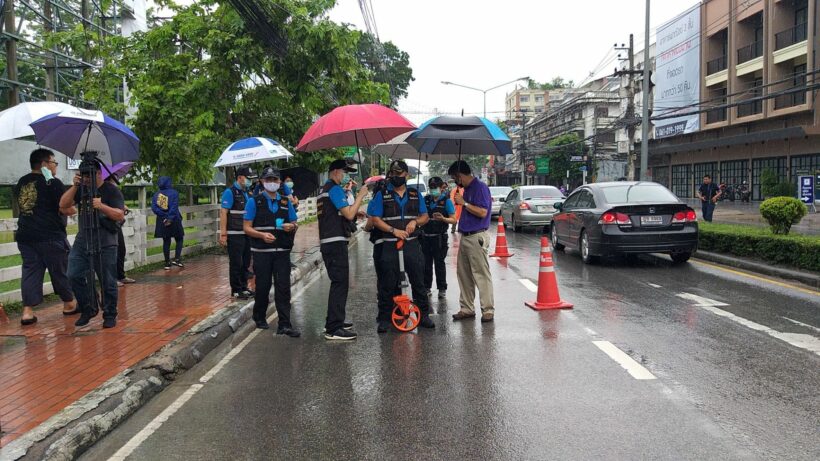 PHOTO: Investigators at the scene of last week's motorbike incident where a key witness in the Boss Yoovidhya case died - Thai PBS North

It’s now been revealed that the phone of a key witness in the Boss Yoovidhya hit-and-run case was stolen and destroyed after the witness died in a Chiang Mai traffic incident last week. It’s the latest in a long list of wtf moments in the botched 8 year long investigation.

40 year old Jaruchat Madthong died last Wednesday after colliding with another rider on his motorcycle. The man’s phone went missing, again triggering outrage and public doubt that it could have been stolen to destroy vital evidence.

Jaruchat Madthong was one of 2 new witnesses that have turned up, claiming that they were following Boss’s car on September 3, 2012 when his Ferrari ran into the back of 47 year old duty policeman, Wichian Klanprasert in the Thong Lor area of Bangkok. The policeman died after being dragged 100 metres along the road.

The 2 witnesses emerged only recently and were used as evidence for the Office of the Attorney General to drop the most serious charge against Boss, that of “reckless driving causing death”. Jaruchat and the other ‘key’ witness told investigators that they saw the policeman’s motorbike veer in front of Boss’s car and said that the Ferrari was travelling under the 80 kilometre per hour speed limit, a lot slower than the alleged 177 kph that forensic investigators ascertained was the car’s speed following the incident.

That dropping of charges is now officially under review by an independent panel after the PM intervened and ordered the situation be reviewed.

Police and independent investigators yesterday questioned Jaruchat’s employer, a former Chiang Mai senator Chuchai Lertpongadisorn. They discovered that Chuchai’s PA, known as “Lan”, had stolen the phone and destroyed it. This was reported to the media by the head of the Chiang Mai chief of the local investigation. But the investigation heard that Lan had removed the sim card from the phone and left it outside Jaruchat’s house.

Questions are now raised why the phone of a key witness in a high-profile hit-and-run case was not immediately impounded following the collision and death of the man.

Lan claimed he was close to Jaruchat and had stolen the phone because he did not want to be linked with the hit-and-run case as he was running in a local election, according to police. Lan told investigators that he stole the phone from the hospital where Jaruchat was taken following the road incident.

Jaruchat’s mother was called to listen to his testimony, after which police charged Lan with theft. Initial investigation of Lan and his family’s financial history found nothing suspicious, said police.

“The sim card will be examined for any information that links Lan with the case.”