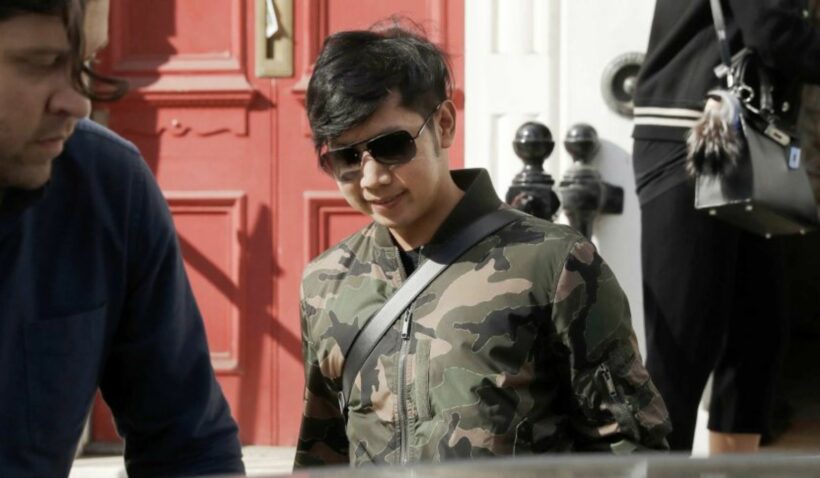 Responding to a massive outpouring of outrage, Thai PM Prayut Chan-o-cha is ordering an official inquiry into the Attorney General’s prosecution team and their decision to drop a reckless driving charge against Vorayuth “Boss” Yoovidhya, an heir to the Red Bull fortune and grandson of the company’s founder.

A spokesperson claims that the PM is “following the issue closely” and is instructing departments to gather facts about the prosecution’s investigation and to explain reasons why “Boss” should not be pursued and arrested, in accordance with the law. The Office of the Attorney General says they had found new evidence which formed the basis of their dropping of charges.

The PM has also hit out at the media saying that they shouldn’t “seize on the controversy” and asked critics not to “distort facts or cause misunderstanding”. The PM has insisted he has not interfered in the cases and the “prosecution works under no political pressure”.

An MP for the Palang Pracharat Party, the ruling coalition party in the government, Sira Jenjaka, as chairman of a House committee on justice and human rights, has scheduled a meeting on Wednesday, July 29 when police and prosecutors will be “invited in for questioning” about the case.

At a news conference on Friday, police spokesman Colonel Krissana Pattanacharoen says that the dropping of charges was done “according to standard procedure” and did not involve favouritism. He claimed police had made known to the prosecutors the evidence they had collected and the results of their investigation and the prosecutors made the decision to drop the charge.

The prosecution’s decision to drop the charge against Boss Yoovidhya has stirred outrage among the public who see it as another example of a “culture of impunity enjoyed by the rich”. Social media is demanding that the Attorney-General specify the reasons behind the decision. Netizens are also noting that the Yoovidhya family donated 300 million baht to the government to handle Covid-19 back in April, just 2 months before the AG and prosecutors dropped the charges.

Mr Vorayuth was accused of being behind the wheel when his Ferrari hit and killed 47 year old Pol Sgt Maj Wichian Klanprasert, a motorcycle policeman, on Sukhumvit Road in Bangkok, on September 3, 2012.

35 year old Boss Voovidhya was accused for the hit-and-run death of a police officer in 2012 and fled the country 5 years later after failing to appear in court after 8 legal summonses, each time claiming he had to attend to business affairs. In 2017 he eventually travelled in the family’s private jet to Singapore and then, eventually, to London. The media were able to track him down a number of times, something the Thai police or Interpol were unable to do. The Yoovidhya family was ranked Asia’s 6th richest, with a fortune of $24.5 billion (778 billion baht), according to a Bloomberg report in August last year.

Charges of speeding and failing to stop and help a crash victim were dropped earlier as a result of time lapsing in the statute of limitations. But the charges of reckless driving still had another 7 years to prosecute, But it emerged last week that the prosecution team had dropped the charges of reckless driving causing death last month. Somehow that information was not forthcoming until CNN.com, a US-based news cable and online media, wrote the story and published it last Thursday.

Documents from the prosecution cited “new information” claiming that the crash took place when the victim’s motorcycle abruptly changed lane and cut in front of Boss’ Ferrari, who was driving under the legal speed limit in the far right lane. 2 witnesses are quoted in new documents claiming that the policeman abruptly changed lanes on his motorcycle causing the fatal hit-and-run incident. Forensic police had concluded, after an investigation of the 2012 incident, that Boss had been driving at 177 kilometres per hour.

Boss initially claimed that Suwet Hom-ubol, a family chauffeur, had been behind the wheel of the Ferrari during the incident, but later admitted to driving the car himself. Suwet would later be charged with making false statements to investigating police. An investigating police officer, Pol Lt Colonel Pannaphol Nammueng, allegedly urged Suwet to pretend to be the Ferrari driver in the fatal crash.

The Thai Office of the Attorney General, which was under intense pressure to make some comments about the matter, yesterday issued a statement announcing that Attorney-General Wongsakul Kittipromwong has appointed a 7 member working team to “look into the handling of the case” by the Department of Southern Bangkok Criminal Litigation (the original incident happened in Thong Lor).

A trending hashtag #saynotoredbull yesterday prompted the company now running the Red Bull empire, TCP Thailand (T.C. Pharmaceutical aka. T.C.Pharma), to distance itself from Boss, issuing a short statement saying the case “is a personal affair of Mr Vorayuth Yoovidhya”. The company’s 7 Board members are all members of the Yoovidhya family.

The statement claimed that Boss “has never assumed any role in the management and daily operations of TCP Group, was never a shareholder, nor has he held any executive position within TCP Group”.

Student protests around the country are now adding the controversy over Boss Yoovidhya to their list of “evidence” that the Thai Government should be dissolved and new elections called. PM Prayut would be aware of the intense fallout from the “Boss” case and will be looking to find ways of saving face on the matter without providing the rising tide of protest any additional fuel.