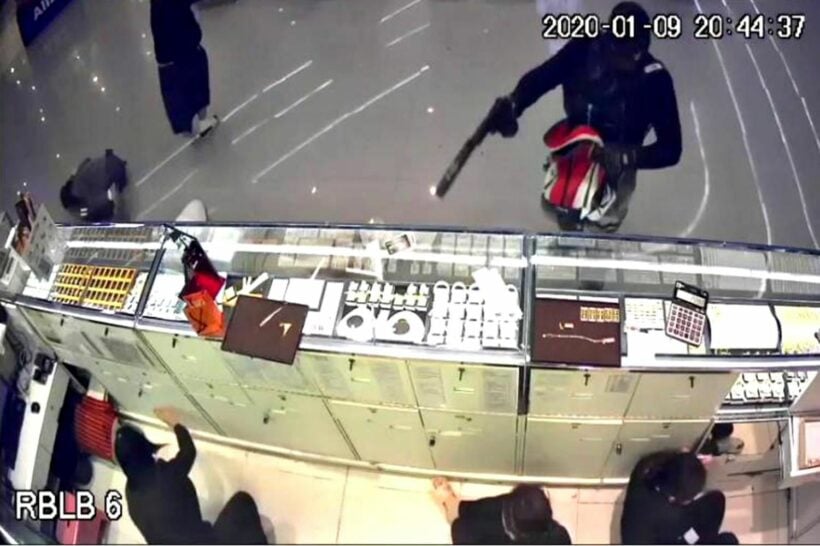 PHOTO: Screengrab of the gunman as he stormed the Aurora Gold Shop on January 9

A suspect has been summoned for questioning in Thailand’s north-eastern province of Nong Khai, just south of the Laos border. It’s believed he may be the man who shot and killed three people, and injured four others during a gold shop heist on January 9 in Lop Buri province.

The man, whose identity has not been disclosed, matches the suspect’s profile, being of a similar height and demeanour, and seen carrying a red shoulder bag, similar to the bag carried by the robber when he stormed the Aurora Gold Shop in the Robinsons Shopping Centre.

At a media briefing on current progress in the case, the national police chief said he was informed by his deputy that a man who resembled the gunman was being questioned in Nong Khai.

The robber, who wore a ski mask, army boots and camouflage clothing, was armed with a 9mm pistol, silencer and a long knife. There was numerous CCTV that captured the man during his brief rampage where he casually strolled into the shop and shot customers and staff. One of the people killed was a two year old boy who was shot in the head as we walking past the shop with his mother.

The Nong Khai police have called the man in for questioning and collected a DNA sample, according to National police chief, Pol Gen Chakthip Chaijinda, adding that if the results of the tests exclude the individual as a suspect, he will be released.

Police in charge of investigating the robbery-murder case have checked footage from about 1,000 CCTV cameras, installed on escape routes that could have been used by the fleeing gunman. They have not found any clues which could lead to an arrest.