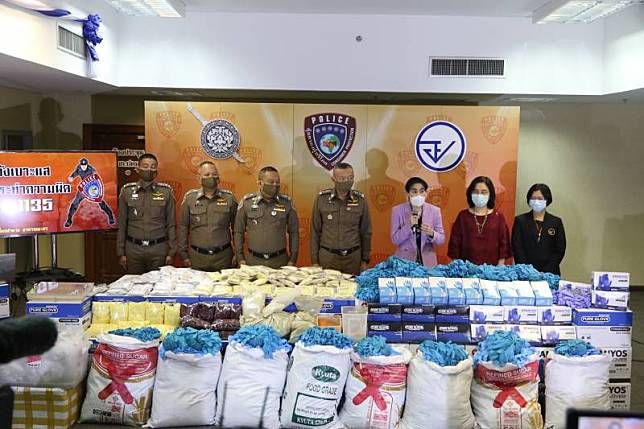 Police busted 2 factories. The first allegedly produced medicine illegally, selling medicines containing steroids and painkillers as “herbal medicine.” The other was allegedly repackaging used medical gloves, boxing them up and making them look good as new.

In the herbal medicine bust, police seized 400,000 packages of what police say is “fake” herbal medicine under the brand name “Jindamanee.” Instead of herbs meant to relieve pain, the medicines have steroids and painkillers, police say.

Jinamanee herbal medicine has been on the market since 2017 and the products are popular with elderly people treating muscle aches, according to Pharmacist Supatra Bunserm. The pharmacist says long term use of the drugs can cause osteoporosis and gastritis.

In the used rubber glove bust,  Police searched Pantyod Health Planet’s factory in Bangkok’s Nong Khaem district. Police say they seized over 900,000 pairs of used medical gloves worth nearly 10 million baht. Apparently, the used gloves were imported into Thailand and then repackaged in Bangkok. Along with being used, the gloves don’t meet government standards to be used in the medical field.

The company’s president Pantayod Akamornrapong was arrested for violating the Medical Device Act. The factory also isn’t registered. Police say the president faces a year in prison and a fine up to 300,000 baht.

Kasetsart school bans use of name, logo, at political events on grounds of “neutrality”