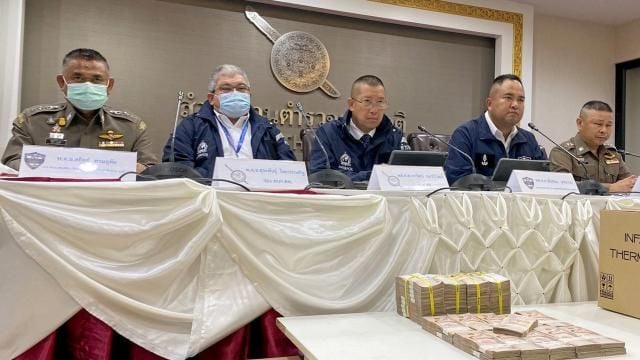 Police arrested 7 people allegedly involved in a multi-million baht scam selling face masks online and not delivering them. The Royal Thai Police teamed up with police in Seoul and Hong Kong for the investigation.

Police say 3 Thai women and 4 Cameroon nationals were arrested on fraud charges. The transnational investigation started when complaints were filed by people in Seoul and Hong Kong, claiming they had paid for large shipments of face masks, but did not receive their orders. 12 million baht was made in the alleged scam, according to the deputy national police chief and director of the Technology Crime Suppression Division Suwat Jangyodsuk.

“1 South Korean national and 2 Hong Kong people filed complaints with the Royal Thai Police’s Foreign Affairs Division that they had transferred more than $400,000 USD or about 12 million baht to the company for face masks, but did not receive the products.”

The group allegedly ran a company called Timbermate selling face masks online, according to Suwat. The website advertises face masks with respirators they say will protect against the coronavirus, adding that common face mask like surgical masks and those with N95 respirators have insufficient filtration and do not properly fit the face. A post was made on the website Scam Survivors saying that there were identical websites for Timbermate under different domain names.

Thai police tracked down 7 people allegedly involved in the scam and found them in Khon Kaen, Maha Sarakham and Kalasin provinces. The 7 people arrested are charged with fraud, money laundering, uploading false information online, working without a work permit and overstaying their visa.

“The suspects include three men and a woman all from Cameroon and three Thai women. Officials also confiscated more than 150 items in their possession, such as computers, laptops, mobile phones, bank passbooks, ATM cards, cars, face masks, thermal scanners and 6.14 million baht in cash.”