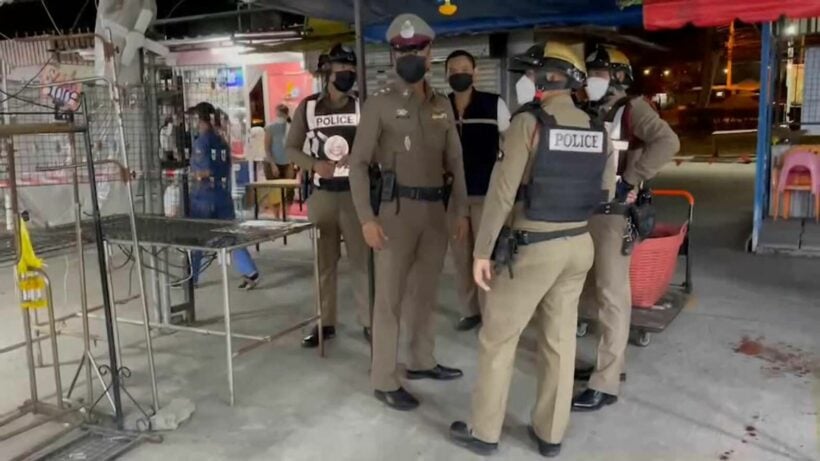 A jealous Thai man stabbed his ex-girlfriend’s new partner over 30 times, leaving him lying in a pool of blood at a busy market in the central province of Samut Prakan province on Tuesday. Rescue workers rushed the unconscious victim to hospital where he died from his injuries.

In a horror attack, 20 year old Korakitti stabbed his ex-girlfriend’s new boyfriend, 31 year old Aphisit, over 30 times and then fled on a motorbike. Unconscious Aphisit was given CPR at the scene and was rushed to Chularat 5 hospital, but didn’t survive the attack.

A vendor at the famous flea market in Bang Sao Thong district said lots of people saw what happened but no one dared intervene because the assailant stabbed the victim repeatedly.

Aphisit’s elder sister told police that the attacker was the former lover of her brother’s girlfriend. She said the ex-boyfriend had attempted to reconcile their relationship, but had been rejected.

Korakitti waited for Aphisit and his girlfriend to pack away their clothing shop in the market before launching his attack. As Aphisit prepared to get into his car and leave the market, Korakitti approached him. Korakitti chased Aphisit through the busy market before relentlessly attacking him with a knife.

The perpetrator’s relatives took Korakitti into Bang Sao Thong police station after the attack, where he confessed that he killed Aphisit out of anger towards his ex-girlfriend. His mother told police the reason behind her son’s regrettable attack was that his ex-girlfriend had deceived Korakitti for seven years, allegedly scamming him out of more than one billion baht.

Korakitti will be charged for Aphisit’s murder at Samut Prakan Provincial Court.

harry1
mum was talking thai, 3 hours ago, Malc-Thai said: How would a 20 year old be scammed out of a billion baht over 7 year's.. so she started scamming his millions when he was 13.. the story doesnt add up,…

Poolie
11 minutes ago, harry1 said: mum was talking thai, the story doesnt add up, mum talking thai He's still dead. I doubt that's important.
CamPat
3 hours ago, riclag said: Since the history of mankind,Women can cause men to react violently at times! Vise versa ! Nobody is worth going to jail for! Johnny Depp and Amber Hearst don't use knifes. She cuts fingers with…
PATRIQUE
people have been sliced up for less .
HiuMak
20 hours ago, Malc-Thai said: How would a 20 year old be scammed out of a billion baht over 7 year's.. so she started scamming his millions when he was 13.. Borrowed money? Thais are notorious for that

New Pattaya festival made over a million baht in revenue, association says