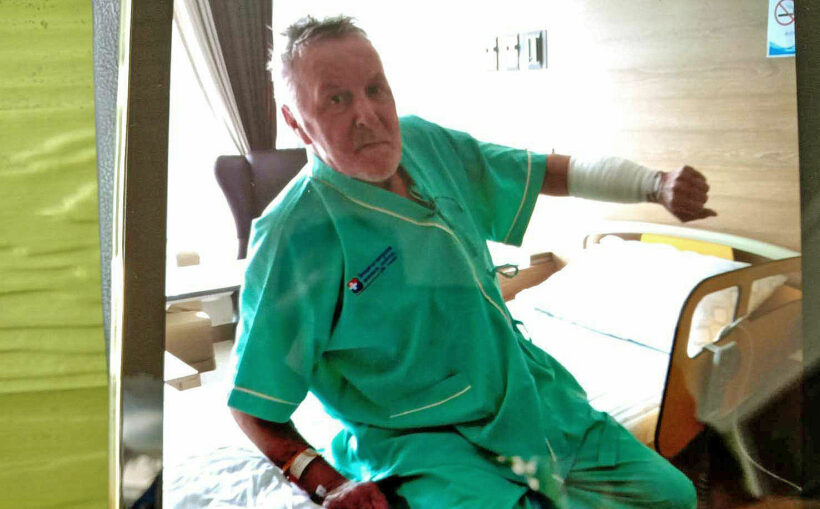 “The men ran off with two ATM cards and were able to convince the couple to tell them their PIN codes.”

A 70 year old German expat has been tied up and his arm slashed during a robbery at his Rassada residence last night. Two men attacked the man, accosted his Thai wife when she arrived home, and stole two ATM cards.

The man’s wife, 50 year old Chuthaporn Chudam, explained to police that drove back to her house in Rassada, east of Phuket Town, around 5pm and found two armed Thai men inside her house. The two were armed with knives and she estimated their age around 20-25 years. They had already bundled up her husband, 70 year old Wilhelm Christian Schrei, with black tape.

She noted that he already had wounds on his arms. Mr. Schrei was taken to Bangkok Hospital Phuket with a 12 centimetre knife wound by his wife. He is reported to be in a stable condition.

The robbers asked questions about what they had in the house and demanded the couple hand over valuables. The Thai woman explained to the pair they didn’t have anything valuable in the house so the men ran off with two ATM cards and were able to convince the couple to tell them their PIN codes.

She told police the men escaped through the back door of the house around 5.20pm.

Later Chuthaporn reported to police that a couple of withdrawals, around 1,900 baht each, were withdrawn from her Kasikorn account at 5.46pm. In the meantime she had phoned her bank and frozen the two account.

Phuket Police have been speaking to Mr. Schrei and are continuing their investigation.