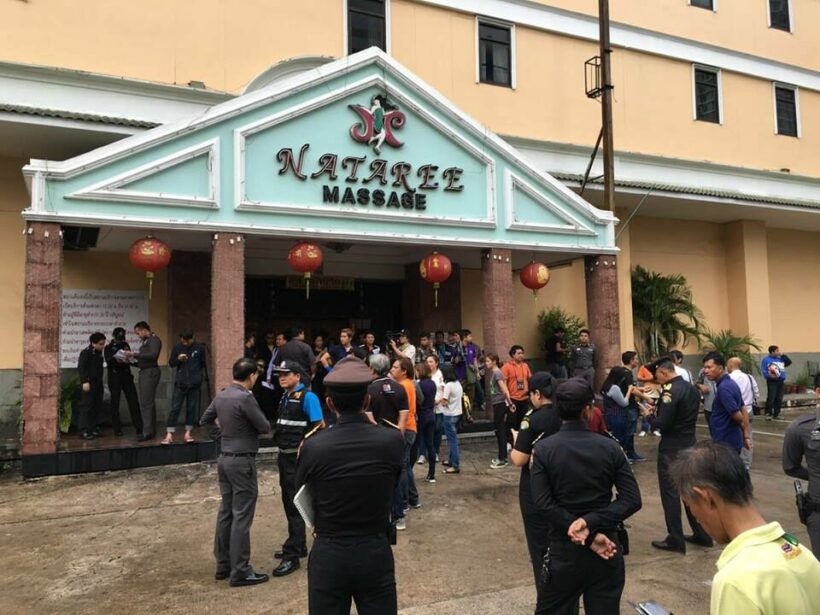 The 2016 raid on Nataree Massage in Bangkok. PHOTO: Twitter/@adventurabeer

A massage parlour boss has been arrested on charges of sex trafficking and child prostitution, after evading police for 5 years. Nation Thailand reports that 63 year old Prasert Sukkhee, the former owner of the Nataree massage parlour, was arrested by anti-people trafficking officers in the Bangkok Noi district of the capital.

The case against Prasert dates back to 2016, when police in the district of Huai Khwang raided the massage parlour, following a report filed by anti-sex trafficking NGO, Lift International, then known as Nvader. Officers discovered children under the age of 18 being used for prostitution. Prasert was charged with child prostitution, employing workers under the age of 15, housing illegal migrant workers, money laundering, and illegally running a massage parlour. He subsequently went on the run.

Jason
While the crime is a crime no matter who commits it, foreigners behaving badly always seems to grab the headlines. If found guilty (and Thailand subscribes to the presumption of innocent until proven guilty), then of course the full force…
divrg
3 hours ago, AlexPTY said: One out, other 4-5k bars, massage places and gogos to go. Well done, dudes  Just so that you get your facts correct. The crushing majority of the women in the bars and gogos are not…

Soidog
I think perhaps the points being made here and giving @Paco the benefit of the doubt, is that it always “feels worse” when a foreigner does it especially to many Thai who are inherently racist. Foreigners (no matter how long they…
Paco
5 hours ago, Malc-Thai said: Do you watch the thai news here daily? . nearly everyday they show, either someone shot with a gun or stabbed.. then you get the woman killed by a rapist or lured to a room…
Paco
5 hours ago, gummy said: Well my Thai is not too bad, my Thai wife's is ok also but then after living here 38 years  I think it should be and I would judge from your immature and ill informed…