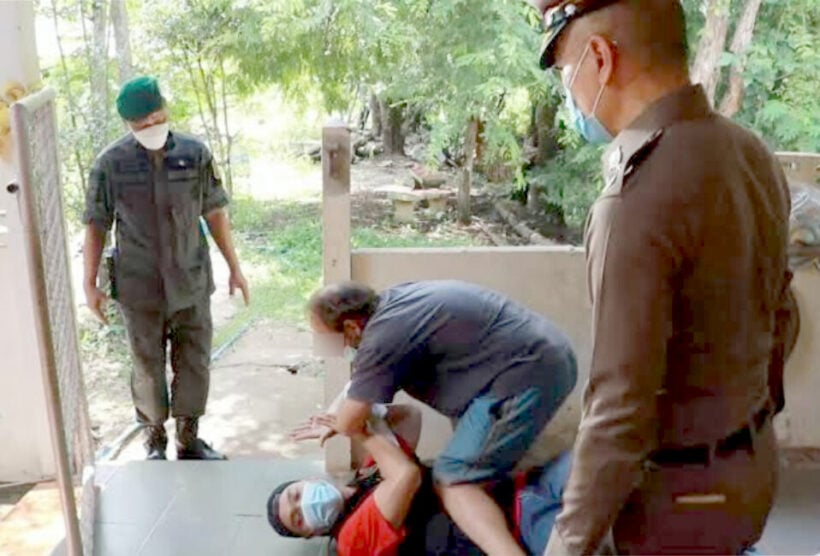 PHOTO: The family of a Thai man beaten to death by a Swiss man claims 300,000 baht is missing. (via Sanook)

After a Swiss man beat an intruding Thai man to death claiming self-defence, the family of the deceased claimed it was not a robbery but rather a confrontation involving an affair with the Swiss man’s wife. Now the mother of the man who was beaten to death claims that nearly 300,000 baht went missing during the incident at the Swiss man’s house.

Udon Thani Police subsequently raided the home where the incident took place yesterday in search of clues regarding the 300,000 baht. The Udon Thani Provincial Court issued a search warrant for the home of 63 year old Rudolf Joseph Rothy. As the owner and his wife were not home, police were escorted by the village headsman and a famous local monk in the interest of transparency.

The raid occurred at around 2 pm and was reported to not have turned up any evidence supporting the financial claims of the victim’s mother, but police still intend to continue a full investigation into the matter.

Rudolf stated that the Thai man had climbed the wall of his home after midnight and broke in wielding a gun and demanding money. He was able to disarm the man by punching him and then tying him up and claimed that he had only intended to subdue the man and not kill him.

The family of the victim disputed the story, saying that he had just earned nearly 300,000 baht in the land deal and had no need to threaten Rudolf for money, but claimed that it was a well-known secret that the victim was carrying on an affair with the Swiss man’s wife.

Rudolf has not made any statement to the press though witnesses say his initial statement matched later statements he gave to the police. He’s been charged with assaulting someone to death. The Thai man has posthumously been charged with attempted murder, carrying a firearm in public, and trespassing at night.

Fanta
7 hours ago, Stonker said: Well, you're obviously confused ... and equally obviously misinformed.  And you obviously need things explained …and obviously frequently.  If a person is NOT in the country, how can the person be involved in an accident IN…

DwizzleyMatthews
52 minutes ago, RobMuir said: I don't believe this Swiss bloke. Why would you tie up somebody you just shot to death. Who just happened to be giving your wife a seeing to and had gun at your house. And…

Rain
4 hours ago, Craig said: Interesting.  Just fyi.  If you’re a farang involved in the death of another party who is Thai (regardless of fault), lawyers here will expect you to pay 300k THB to that person’s family for the…
Stonker
1 hour ago, Fanta said: And you obviously need things explained …and obviously frequently.  If a person is NOT in the country, how can the person be involved in an accident IN the country?  JHC. Maybe English is your second language,…
Stonker
1 hour ago, Rain said: There's no such legality that requires this. Aside from all the nonsense that many make up, every situation of this caliber will differ from the next.  Exactly. Amongst a plethora of uninformed absurdity, this has…