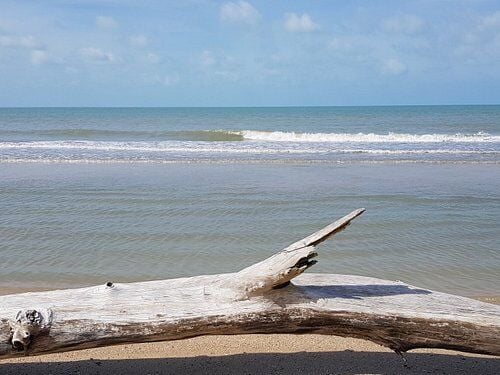 Fishermen discovered the body of a man floating on the surface of the sea around 500 metres away from the coast in Nakhon Si Thammarat province in southern Thailand yesterday. The man’s wrists and ankles had been tied up with ropes and weighed down with rocks. His identity remains unknown.

The swollen corpse of a man, around 165 centimetres tall and estimated to be around 30-35 years old, was pulled to shore by police, doctors and rescue workers yesterday evening in Pak Phanang District. The team expects that the man had been dead for around one week.

The police are treating the incident as a murder because the man’s wrists and ankles were tied up with nylon rope and three rocks had been attached in an attempt to weigh the body down.

Local fishermen discovered the corpse while they were out fishing yesterday. The fishermen say they expect that the deceased is a fellow fisherman who perhaps had an altercation with his crew members, who murdered him and threw him into the sea, but details about his murder are still unknown.

The man’s body will be sent for an autopsy at the forensic department of Maharaj Nakhon Si Thammarat Hospital.

PapayaBokBok
Maybe a cruise gone bad on the love boat
Ramanathan.P
When two men fight against each other, there reason is either they are drunk or fight over a woman.....that is the universal theory. And both does not add any value to life after that....except misery and sufferings for rest of…

palooka
Maybe the criminal element settling scores. Possibly they have cut backs because of Covid and cannot afford the concrete slippers. The costs of Covid has affected everyone.🤣

Benroon
15 hours ago, Ramanathan.P said: When two men fight against each other, there reason is either they are drunk or fight over a woman.....that is the universal theory. And both does not add any value to life after that....except misery…