A Nigerian man who entered Thailand illegally 2 years ago has arrested in Bangkok’s Suan Luang area and found to be in possession of cocaine. Thailand’s immigration chief  says immigration officers were keeping tabs on a drug distribution network and soon had a black man in their sights at a condo building in the Suan Luang area of the capital. 31 year old “Ubah” was approached as he got into his Toyota Vios in a parking lot.

In the car police found about 10 grams of cocaine in the form of 12 compressed tablets in small clear resealable plastic bags, contained in a larger bag hidden under the steering wheel. A search of his room followed and authorities learned that he had no passport and had been in Thailand illegally for 2 years. A Kasikorn bank book was taken into evidence.

The suspect said he got the drugs from a fellow Nigerian called “Nonso” (INN names him as “Bonzo”). Police believe he’s a big player in the drug network, which according to Ubah, involves numerous foreigners.

A vinyl board at the Suang Luang police station outlining the case said that evidence will be gathered and the inquiry is being expanded. It was stamped: “Coming Soon!”. 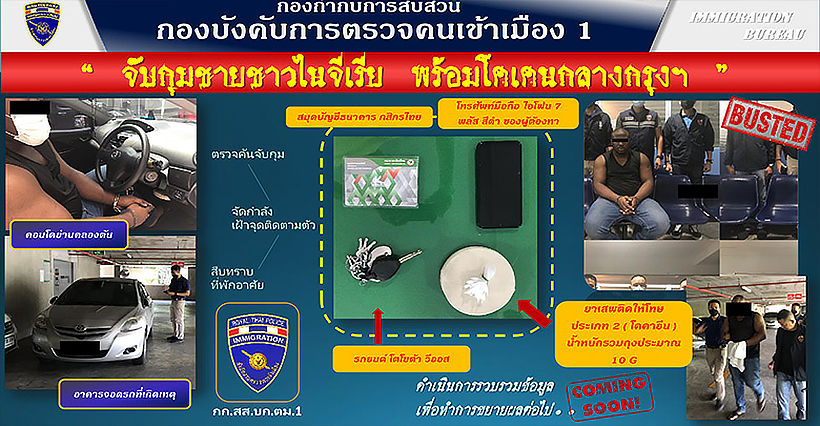