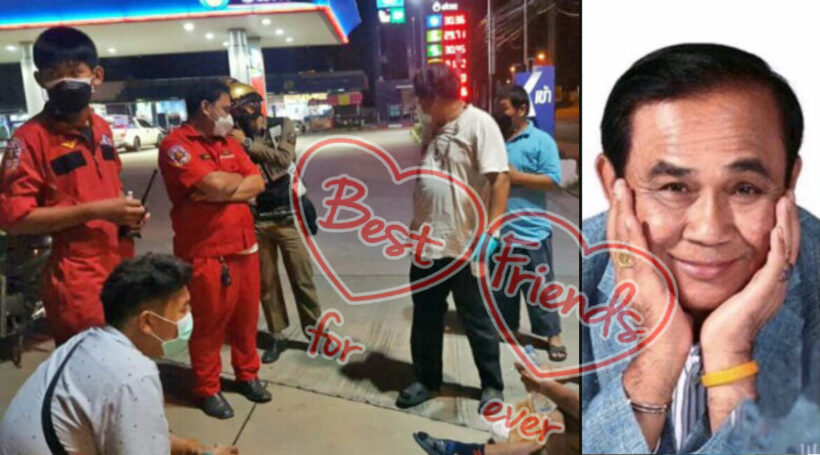 PHOTO: A man being arrested claimed to be a close personal friend of PM Prayut. (via Pattaya News)

When Chon Buri police attempted to take a belligerent man into custody, the man gave a unique excuse of why he should be let go: he is a “close personal friend” of PM Prayut Chan-o-cha. The 54 year old man was reported to be running along the road, shouting and threatening people walking on the street and attacking cars randomly.

The incident in Baan Suan subdistrict was called in to the Mueang Chon Buri Police on Thursday in the early evening and they responded to the scene and quickly subdued the contentious man for his seemingly random attacks wreaking havoc on the street. But the man became uncooperative and demanded he be brought to his good friend the Prime Minister Prayut right away.

The man argued and resisted the police trying to take him to the police station for quite a while, warning them that when PM Prayut finds out that they have taken him, the police officers would be in big trouble.

Police eventually agreed to take the man to a nearby golf course for a personal meeting with the prime minister at which point the 54 year old suspect immediately changed moods, settling down and becoming cooperative.

He was undoubtedly disappointed when police instead took him to the Mueang Chon Buri Police Station where they booked him into custody facing multiple charges of disrupting the peace and property damage.

Police said they were unable to corroborate the man’s claims of knowing the prime minister, finding no evidence they ever met or had any association.

PM Prayut has yet to comment or take action regarding his “close personal friend.”

AlexPTY
we all are, cause he's just such a people person
DiJoDavO
7 hours ago, gummy said: Perhaps he could be a friend of the PM as it was reported he was shouting and threatening people, which are  the attributes of the PM himself. Often when I have a good joke to…