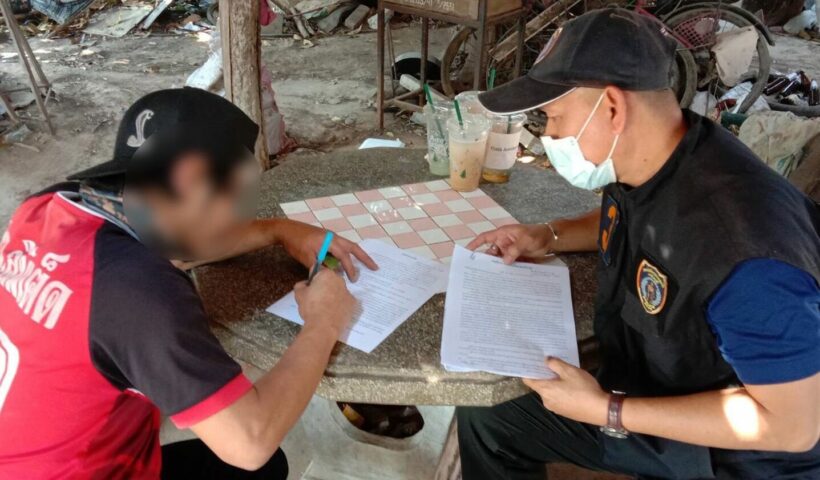 In the Northeastern province of Yasothon, police arrested 3 men on several charges relating to selling a 16 year old girl for sex. Police tracked the 3 men down as part of a larger investigation from a previous suspect they had arrested on similar charges for underage prostitution involving another girl also aged 16.

3 men, aged 27, 32, and 33, were taken into custody by officers from the Anti-Trafficking in Persons Division yesterday according to the Division Commander. Two were arrested in Maha Chana Chai district and the third was arrested in Kham Khuen Kaeo district.

Two of the men are accused of recruiting the girl through her Twitter account and coercing her into meeting older men for sex. The men arranged customers for the 16 year old girl, charging between 1,200 and 1,500 baht for each meeting with each man.

The two men took a commission of between 400 and 500 baht for each meeting, and arranged several customers for her, often driving her themselves to meet with the customers for sex.

After becoming aware of the activity, the Criminal Court issued warrants for all 3 of the suspects on January 24. The two men who recruited the 16 year old girl and arranged her meetups will face charges of collusion in human trafficking by reaping profit from a girl aged over 15 but below 18 who was paid for sex.

The third man was one of the customers that the other man had arranged for the 16 year old girl. He was arrested separately on a warrant for depriving a girl aged over 15 but below 18 of her freedom.

KaptainRob
10 minutes ago, ctxa said: A girl of that age is not mature enough to understand what she’s doing, and may be just blinded by money. Which is why her parents and the law must protect her. I wonder if…

Thommo
3 hours ago, Nobodysfriend said: Yeah ... but it looks like they did not have to force her or used violence to make her do this . Easy money for her ...? what sickening thing to say …

Thommo
50 minutes ago, steve860 said: You not at school today? Silly comment . thats your opinion😢

Lyp14 [ctxa]
5 hours ago, KaptainRob said: I wonder if the girls parent(s) received any compensation as this has happened before under similar circumstances. I know of one girl sold to an older man whilst she was still 14. The mother needed…