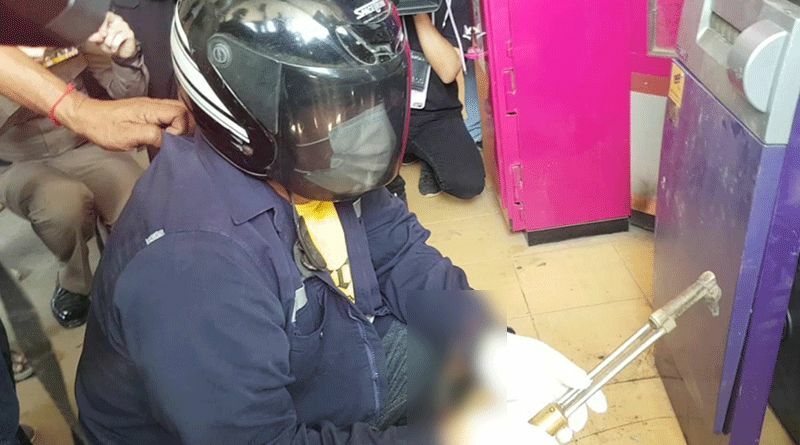 Thai police arrested 3 men who allegedly broke open an ATM and ran off with more than 700,000 baht in cash. The men allegedly used a gas torch to melt and cut through the metal of a Siam Commercial Bank ATM outside a CJ convenience store in Prachinburi.

The men allegedly burned the keyhole and cut a square on the back of the ATM. They allegedly grabbed 758,900 baht and left 2,218 baht in the ATM.

In a re-enactment of the crime, a typical practice in Thai law enforcement, 50 people watched the suspects show how they broke into the ATM machine. Police say the suspects, Somnuek Janchom, Thanajit Potila, and Nopparat, all admitted to the crime.

Somnuek, told reporters that he worked as air conditioner technician and installed units in shopping malls, but he lost his job during the coronavirus pandemic and was thousands of baht in debt.

“After the pandemic started I became unemployed. As a result, I owe 360,000 to a loan shark. I tried to ask for loans from banks but it didn’t work out.”

To get money fast he decided to steal from an ATM, he told reporters. He started looking around for ATM machines that were in quiet areas. Somnuek says he got his relatives to help break open the machine.