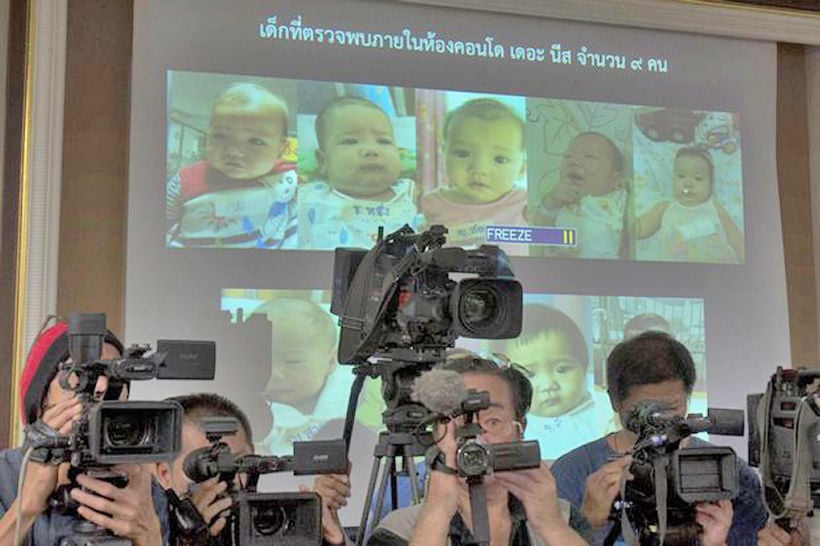 PHOTO: Surrogacy was banned in Thailand in 2015 after revelations of abuses - AP

Police say the two were hired as brokers to lure Thai women to work as surrogate mothers. Jakkarat can speaks the languages of neighbouring countries and served as a translator for Kulisara during trips to those countries. A police source says the pair travelled between Thailand and Cambodia more than 100 times over the past two years.

On Thursday nine suspects, seven Thais and two Chinese, were arrested in joint raids in Bangkok, Pathum Thani and Sukhothai. They face charges of colluding in transnational criminal activities and engaging in commercial surrogacy, illegal under Thai law. The raids came after police found a gang of Chinese nationals was hiring Thai women as surrogate mothers.

The illegal surrogacy operation is believed to have started in 2012. At least 100 women across the country were hired as surrogate mothers, according to police. The surrogate mothers travelled to neighbouring countries for “assisted reproductive treatment” and returned to Thailand where they stayed until delivery. In some cases, they were sent to China, where they stayed until giving birth.

The deputy commissioner of the Central Investigation Bureau says the probe followed a tip-off from the Department of Health Service Support. Investigators questioned women in Pathum Thani province, north of Bangkok, who were hired as surrogates. They found that at least 15 babies born from assisted reproductive technologies were included in their household registrations,and that at least 50 babies from surrogate mothers had been taken out of the country. Assets seized from the nine include 16 vehicles with a combined value of 15 million baht, a house, and a Bangkok company worth about 20 million baht.