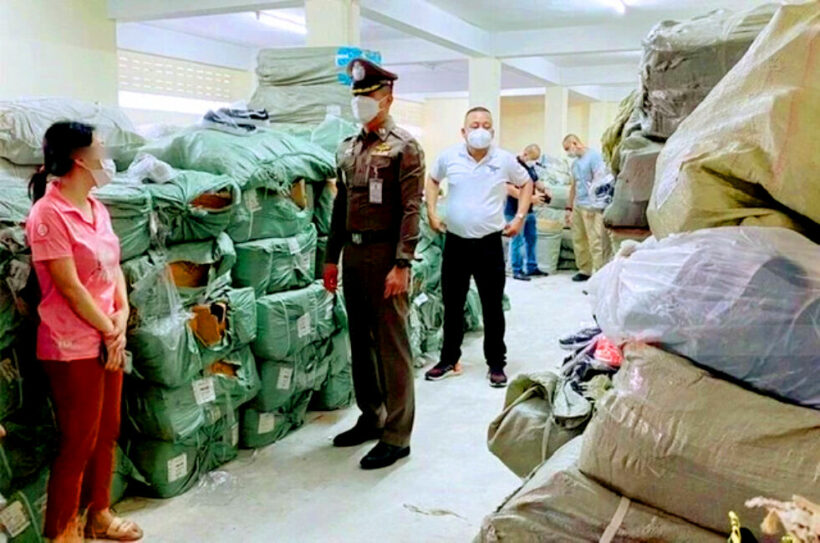 A search of a business in southwestern Bangkok yesterday after a tip-off about low-quality knockoff goods being sold online led to the arrest of a Chinese man with 16 million baht of merchandise stored in his warehouse.

The Economic Crime Division Police obtained a search warrant for a warehouse on Soi Sakaengam 39/2 in Bang Khun Thian and then raided the business. Inside the warehouse, police uncovered a massive amount of knockoff shoes and shirts that were cheap imitations of famous brands.

Police arrested a Chinese man identified only as Ma S. R. for being in possession of the pirated goods as well as intent to sell the counterfeit items. The man also did not have a valid work permit.

While he admitted ownership of the goods in the warehouse, he said that his wife was the one responsible for importing all the knockoff items that were clearly fake.

The operation allegedly sold these shoes and shirts that were labelled as such popular international brands as Fila and Gucci as well as products that were clearly an imitation of the Off-White brand. It is reported that all the products were sold to buyers online, their details of whether they were sold via social media or custom website we’re not immediately clear.

Police raided the warehouse after receiving complaints that the knockoff products being sold from the warehouse were very low quality and clearly fake. Still, the warehouse full of merchandise was valued at about 16 million baht.

Scribble
Only 16 million Baht worth found... Could have found more in MBK.

NCC1701A
"You have Calvin Klein men's briefs in black? They make me look big."

Rain
Boycott the multinational brand name mafias! They're not what they promote themselves to be... Purchase knock-offs only.

gummy
Just now, Rain said: Boycott the multinational brand name mafias! They're not what they promote themselves to be... Purchase knock-offs only. I tend to agree with that. Designer brands etc  is always been a bit of con. Their products have…
Leo
He brought his "expertise" to Thailand?