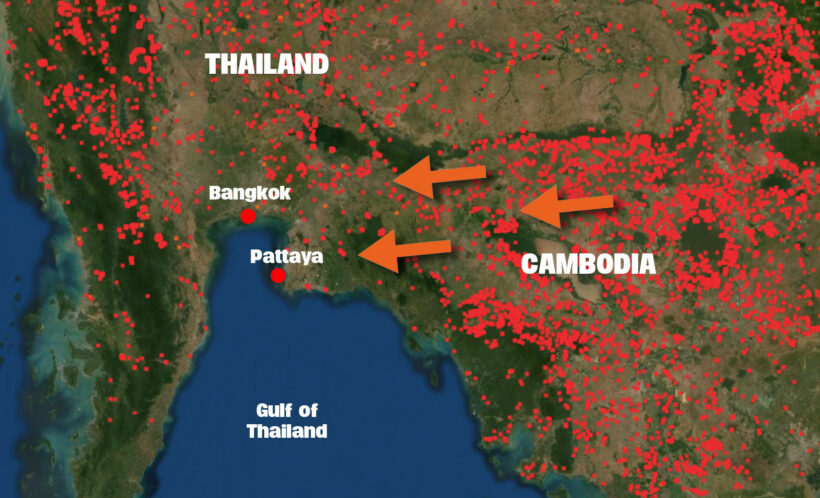 Bangkok mums and dads will need to sort out what to do with the kids for the rest of the week after the Bangkok Metropolitan Administration closed public schools from today because of the excessive air pollution. Most of the smoke and haze is blowing in from Cambodia with light easterly winds.

All schools under the supervision of the BMA will close until Friday. Air quality in the capital has worsened over the past two days with Bangkok recurring the world’s 5th worst air pollution yesterday (today it is 10th). The forecast today is for light winds and poor air circulation which will compound the accumulation of PM2.5 dust and smoke particles.

In other measures City Hall is asking high-rise construction and electric train construction sites to suspend their operations until Friday.

And on the transport front Police have been asked to prevent trucks with six wheels or more from accessing the Ratchadapisek ring road until midnight on Thursday and to set up roadblocks to check vehicle exhaust emissions.

Most of these measures will do little to improve the overall situation as the poor air quality in the capital is caused by plantation burn-offs from sugar, corn and rice fields in the central, north and north-east, plus easterly airflows blowing in the same burn-off smoke from Cambodian farms.

Back in the city, district officials and municipal police will patrol open areas to make sure there is no burning outdoors, while city workers will spray water in the air and on roads to wash away dust.

The whole of Bangkok and its vicinity were found to contain excessive amounts of PM2.5 dust and smoke particles yesterday, measuring up to 188, nearly 4 times the upper safe limit imposed by the Pollution Control Department, and nearly 8 times the limit set by the World Health Organisation.

This morning the highest readings around Bangkok are 160 but out to the west, in the Ratchaburi province, readings are up to 208. Pattaya has readings up to 159. Up in the north, Chiang Mai has a reading this morning of 165, and central Thailand’s Kampaeng Phet measured the country’s worst today at 218. The windflower map shows the easterly winds blowing the forest and plantation smoke from Cambodia and Laos into Thailand. Chiang Mai is listed as the world’s 5th worst air pollution today.

Check out the actives fires, principally responsible for causing the air pollution around Bangkok today, HERE.

Read The Thaiger’s editorial about the air pollution ‘elephant in the room’ HERE.

Bangkok public schools closed until Friday due to air quality