Today, Thammasat University’s Tha Prachan campus in Bangkok is seeing thousands of protesters flood its campus in what they say is the biggest rally yet against the Prayut-led Thai government.  After unsuccessfully trying to gain permission from university officials, the protesters broke through the gates of the history-laden university and are now gathering for the schedule of anti-government speeches.

Earlier this week protesters were hoping for around 50,000 demonstrators with security officials saying it would more likely to be around 20,000. Today’s poor Bangkok weather is likely to make a crowd size more the latter than the former.

Security officials did little to prevent their entrance into the campus and people on site say that there is a clear intention, from all sides, not to inflame any tensions.

The protesters, some who have identified themselves as members of the pro-Thaksin Red Shirt movement, are made up of a majority of students who are being led by student and political activists “Panusaya” and “Panupong”. Both have spoken at previous rallies and made it clear about their demands for political reform and changes to the role of the Thai monarch.

Today’s protest was well-anticipated as the government has deployed up to 10,000 police and sent warnings to those around the area, including such things as respecting social distancing and following the laws on public assembly.  Embassies have also sent out notifications to expats warning them to be aware of their surroundings in downtown Bangkok. Despite such warnings by police, officials say they will try to ensure protesters’ safety during the event. 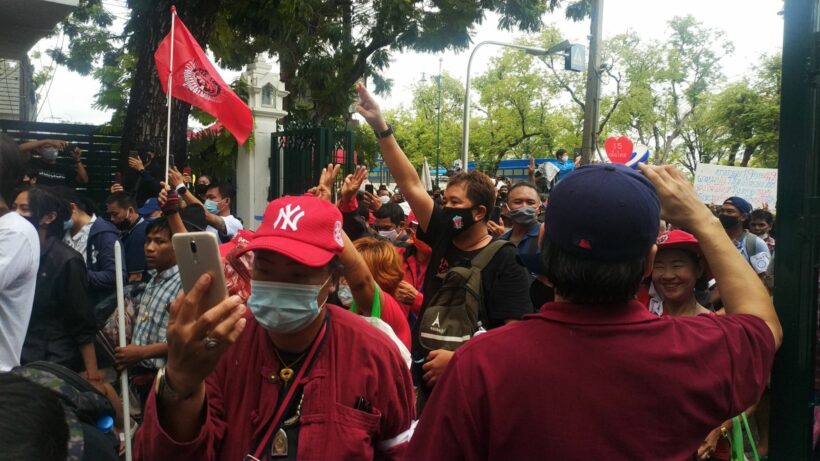 Some protests in the past have become violent – Thammasat University was the scene of a violent clash in the 1970’s which followed after the ousting of a political party only to later attempt to bring back one of the party’s leaders. Official figures put the death toll of the so-called Thammasat Massacre at 46, with 167 injured and more than 3,000 arrested. However, survivors put the death toll closer to 100. The clash was then used to justify a military coup which overthrew the democratically-elected government.

Protesters started pouring into the area early today with some even shaking the gates in an attempt to open them, while others put up anti-government posters on the walls facing the royal parade grounds of Sanam Luang.  The group also prepared for the event by setting up makeshift kitchens to supply the rally-goers with food as the demonstration is expected to go into the evening.  At 2 pm today, leaders of the protest say they will push forward with their demands for political reform and changes to the country’s revered monarchy with a film producer, Yutthalert Sippapark, offering his works and art to be screened at the site tonight.