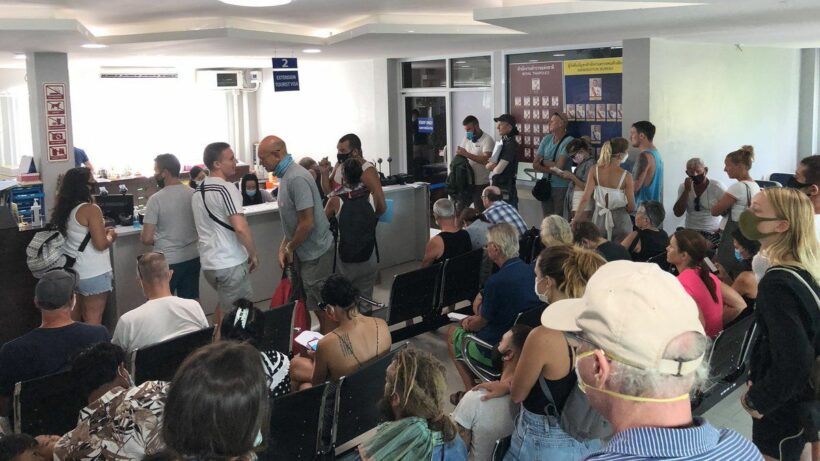 The order, released by the Ministry of Interior, grants “special permission for some classes of aliens to stay in the Kingdom.”

It was signed by Prayuth and head of the Ministry of Interior, Anupong Paochinda.

ORIGINAL STORY:
With many flights cancelled, entire fleets grounded and hotels ordered closed, thousands of tourists and expats across Thailand are in a state of limbo… unable to leave, not allowed to stay. To make matters worse, social distancing requirements are creating chaos at crowded immigration offices nationwide, and onerous new requirements have been added for visa extensions. The situation has put foreigners and immigration officials at additional risk.

But the Immigration Bureau has announced that the Cabinet has approved a plan to offer automatic visa extensions for foreigners, though it will not come into effect until it has been signed by PM Prayut Chan-o-cha.

An immigration spokesman says a set of new rules, which also includes visa amnesty, has been approved by the Ministry of Interior Affairs and is due to be inked by the PM soon. The measure follows complaints of overcrowding and risk of virus infection at immigration offices across the country.

“It will be signed by the PM soon. Please wait for official announcements and don’t fall for online rumours.”

Details of the new rules emerged yesterday after local blogger Richard Barrow wrote on his social media platforms that the bureau has proposed plans to give every foreign national an automatic 30 day stay extension, citing sources within Immigration.

Richard also noted that the 90-day reporting will be temporarily suspended and those who have obtained permanent resident status will not lose their status if they are not able to return to Thailand within a one year period.

Visa amnesty will be granted to every foreigner, but the post did not elaborate on how it will be enforced.

The Immigration Bureau has already approved the proposal to offer automatic extension of stay to foreigners in #Thailand. They are waiting to implement it but they cannot do anything until it has been signed by the PM. They understand your anger & ask you to be patient. THREAD >>

“This is ready to be implemented straight away, but the Immigration Bureau cannot start until it has been signed by the PM. From what I understand, it’s already in the prime minister’s office. They are optimistic he will sign it very soon.”

“I just got off the phone with another Immigration official. So, it looks like the photos that I tweeted of long queues have caught the attention of the right people.”

“Who is he? He is not the Immigration Bureau. How could he come out to say something like that?We will make official announcements when it becomes effective.”