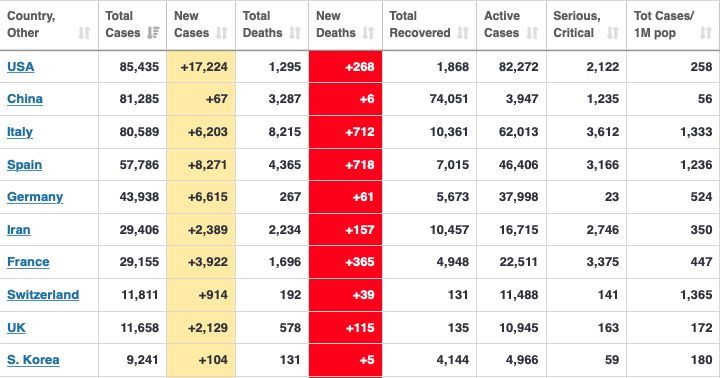 The turning point comes as US President Donald Trump predicted the US would “get back to work pretty quickly.” Asked about the latest figures at a press briefing yesterday, Trump said they were “a tribute to the amount of testing that we’re doing”.

He also cast doubt on the figures coming out of Beijing, telling reporters: “You don’t know what the numbers are in China.”

Trump said he would speak to President Xi Jinping  Thursday night US time, but denied the Chinese leader had asked him to “calm down” the language he uses to refer to the pandemic, which Trumps still calls “the Chinese virus”.

Trump has set a goal of Easter Sunday, April 12, for reopening the US for business. Yesterday it was revealed that an unprecedented 3.3 million Americans have been laid off work due to the virus.

The plan emerged as new research emerged yesterday estimating Covid-19-related deaths in the US could top 80,000 over the coming four months. As many as 2,300 patients could die every day during the epidemic peak, set for some point in April, even if people observe strict social distancing, according to the study from the Institute for Health Metrics and Evaluation at the University of Washington’s School of Medicine.

“A lot of people misinterpret when I say go back – they’re going to be practising as much as you can social distancing, and washing your hands and not shaking hands and all of the things we talked about,” said the US President.

In a letter to state governors Trump said his team plans to release federal social distancing guidelines that may advise some regions to loosen restrictions. Warning of “a long battle ahead” the letter said “robust” testing protocols might allow some counties to lift their safeguards against the coronavirus.