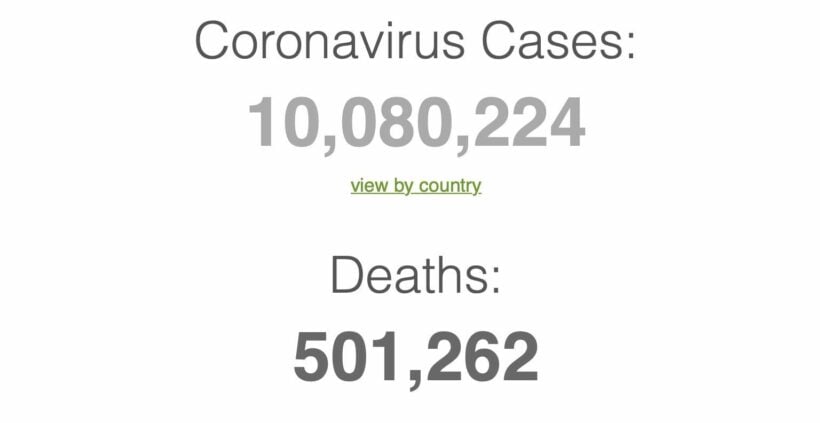 The Covid-19 coronavirus has now officially infected over 10 million people worldwide. We emphasise “officially” because today’s sad milestone only accounts for confirmed cases. The 10 million case milestone was almost certainly passed some time ago with the US Centres for Disease Control and Prevention announcing recently that infections in the US alone could be 10 times greater than reported. Then there’s the many third world and developing nations lacking resources to test major sections of their populations.

The other milestone that has been passed in the past 24 hours is the number of recorded Covid-19 deaths in the world which has now surged past 500,000. But the statistical death rate from Covid-19 of 5% is estimated to be more like 1-2% by the World Health Organisation when the unreported cases are considered in scientific modelling.

Some 6 months now into this pandemic the world’s infection numbers continue to rise, indeed accelerate. The numbers of deaths per day is starting to rise again after a gradual decline in April and May. 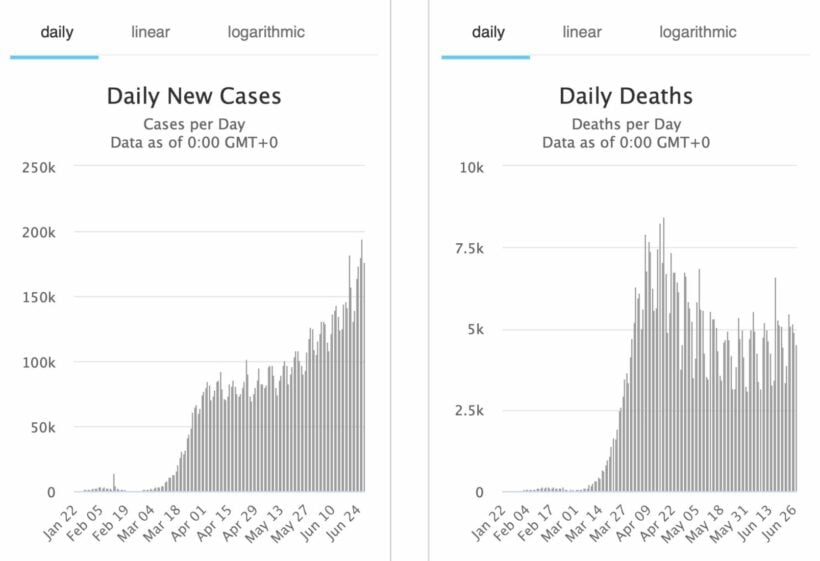 The Covid-19 coronavirus (SARS-CoV-2) was first detected in the city of Wuhan, in China’s Hubei province, and traced to a food market selling live animals, including bats, from whom the virus is thought to have jumped the species barrier to humans. As such, Covid-19 is described as a zoonotic virus. The Thaiger has done a breakdown of the first crucial weeks of the virus HERE.

The US, one of the current epicentres of infection growth, has over a quarter of the worldwide infections and roughly the same percentage of the global death toll, despite having only about 4.3% of the world’s population. The southern and western states of Florida, Texas, California and Arizona have been reporting accelerating numbers of new infections providing almost 60% of the country’s daily new cases in the past two weeks of data. But the number of daily deaths in the US has dropped drastically in the past 2 months as treatments improve over time.

Brazil, Russia, India and the UK are the other countries in the world’s top 5 total case numbers. Here is the worldometers.com listing as of 9am Sunday (Thai time).

In China’s current ‘second wave’ outbreak since June 11, stemming from a sprawling wholesale food centre in the southwest suburbs of Beijing, 311 people in the city of more than 20 million have contracted the virus. The country reported 3 new imported cases on Friday, infections linked to travellers arriving from abroad. That compares with 4 cases a day earlier. That took the cumulative number of confirmed cases in mainland China to 83,500.

Brazil has recorded 38,693 new cases of the novel coronavirus in the past 24 hours and 1,109 additional deaths, according to its Health Ministry. Total case numbers have more than doubled during June.

Thailand, with a population of some 69 million has had a total of 3,162 confirmed cases since the beginning of the outbreak, and 58 deaths. It was the first country outside mainland China to confirm a case of the virus on January 14. The kingdom has now gone 33 days without a locally transmitted case and has now lifted nearly all ‘lockdown’ restrictions and looking towards re-opening the borders in a staged process starting July 1.

And in the past 24 hours, Zurich’s health officials announced they ordered a 10 day quarantine for almost 300 guests and staff of a nightclub after a patron tested positive for the virus and had been proven to have infected others. The man was at the ‘Flamingo Club’ on June 21 and tested positive on June 25. Five other people who were at the club with him have also tested positive since.

Similar outbreaks have also occurred in nightlife zones in Japan and Seoul over the past month.