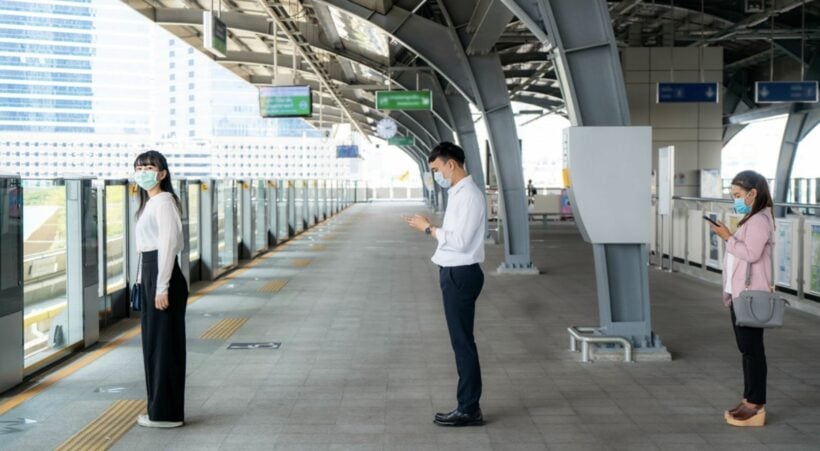 Get used to it. Things have changed. There is no ‘new normal’, there is just NEW. We’re living in the Covid era and all having to adjust to economic calamity, changed schedules and some things, previously easy, are now difficult, or banned altogether. What are some of the things that have changed?

Like it or not, the wearing of masks, certainly in public, is likely to become the norm. Even if governments drops rules about the wearing of masks it is very likely that Thais, and just about any other Asian cultures, will continue to wear them, at leas tin the short to medium term. They’ll become a show of solidarity, perhaps even a fashion item. But they’re here to stay.

Whilst there is all sorts of medical evidence about the value of wearing face masks as a partial protection from Covid-19, and any other respiratory viruses, it won’t hurt to keep wearing the mask. And being guests in the country, if it makes the locals feel more comfortable around you if you’re wearing a mask, just put on the goddam mask!

The Covid-19 pandemic has sparked a whole new era of nationalism, xenophobia and fear. That is true in Thailand and just about everywhere else as well. It’s a natural response to something new and unknown. That ‘foreigners’ were the first to introduce Covid-19 into Thailand (the first case identified in Thailand, and the first outside of China as well, was a Chinese tourist flying into Bangkok from Wuhan), merely gives the impression that things beyond the borders are bad, whilst everything inside the border is OK.

In many countries the shift in cultural attitudes, and the fear of foreigners, will spark political changes and a different attitude to immigration around the world.

Travelling domestically, and internationally, is going to be different in the future. In the short-term we’ve already seen many discount, and even legacy, airlines, having to put their hands out for government loans. Much of the world’s fleet of jets has been grounded and, like it or not, getting the whole aviation machinery up and running again, will take time and be incredibly costly.

Even if the boom gates are raised and cross-border travel and tourism starts again in earnest, there are some airlines, hotels, tour operators, attractions and other downstream players, that haven’t been able to weather the Covid storm and will probably never be seen again. Of course new players will eventually emerge if conditions continue to improve. Even still, the mere prospect of getting back on a plane or stepping on a cruise ship will not be a major priority for many in the near to middle future.

Many world travellers, for business or pleasure, will simply not have the economic capabilities to travel, or their trips will be shorter, or the hotels they book will be cheaper. Until economies improve, the entire travel business will be a humbled industry, hobbled by the fear to pack the suitcase and head overseas.

Just the mere mention of the word has people rushing for their keyboards. Pre-Covid, there was already a big anti-vaxxer movement, mostly people misinformed about the nature and purpose of vaccines – certainly the improvement in health care during the 20th century was responsible for saving millions of lives.

A Covid-19 vaccine will be a game changer for just about everything else in this list but, even if a safe and viable (and hopefully reasonably inexpensive) vaccine is developed, many will refuse to be vaccinated. Their decisions will help drag on the suffering for the rest of the world.

In the short term there may also be refusals of people without vaccines to fly, or enter stores and other public spaces.

A few vaccine inconvenient truths… firstly, it is likely that it won’t be 100% successful and that it may need booster shots to remain effective. Secondly, if a Covid-19 vaccine is developed, it will be the first coronavirus vaccine ever developed. But, given the enormous impact of this pandemic, as governments have closed down economies in an effort to contain the virus, the need to develop a vaccine has never been so important.

Every economy in the world has suffered, some more than others. Economies are now registering deep recessions that will eventually turn into a major depression – the first such economic collapse since the Great Depression of 1929 – 1932. This is just something all governments need to face. And we’ll all need to confront the effect it will have on our family and personal situations.

Despite the lines drawn on the maps, the world is now linked in such a way that recessions and economic malaise in one country will affect just about every other country to some degree. World supply chains are so complex that all manufacturing will also be affected, everywhere.

Stock markets, artificially inflated with government stimulus, will eventually collapse or correct. The effects of these corrections will then ricochet downstream and affect hundreds of thousands of businesses down the line.

Already, there are sectors of business – retail, restaurants, travel, entertainment – that have been massively hit as they’ve responded to the challenges of closures, bans and lockdowns. Some are re-aligning their business models to cope with the changes. Others will struggle. Many will go out of business.

It’s also been the carrier of conspiracy theories, misinformation and nonsense about ‘plandemics’, secret laboratories, vaccine theories, 5G towers causing the coronavirus, etc, etc. Somehow Bill Gates and GMOs have been dragged into the long list of garbage written about Covid 19 as well. Oh, Covid-19 is ‘just the flu’ and Big Pharma (with a capital B and P) are also ‘in’ on the plan too.

But the internet is still our best bet at some sort of information democracy where ideas rise and get discussed, where news and information is mostly freely available. Where we can watch hours of 60s sitcoms or important historic documentaries, and where you can share your words, music and art to the world.

Although most of the world, the vast majority, has been adversely affected by Covid-19, there have also been some winners.

Some tech companies, fuelled by specific stimulus of the US stock market by the country’s central bank, have become massively wealthy over the past 6 months, making the owners and shareholders rich – Amazon, Google, Apple, Facebook and others.

We’ve now been enduring the effects of the pandemic since the start of the year. From the early reports out of a small community in Wuhan, to the global onset and pandemic, Covid-19 has changed 2020 and turned it into a nightmare for some, a disruption for others, an interruption to travel, and forced us all to rethink our lives and careers. Some 860,000+ people have also succumbed to the virus – their only crime, breathing.

But, looking back through history and the behaviour of similar viruses, this is just the beginning of what will likely be at least 2-3 years of spikes, outbreaks and also a progressive list of successful treatments and, hopefully, a vaccine.

In the case of both MERS and SARS, both recent coronavirus outbreaks, the virus seemingly ran out of steam due to strict lockdowns and containment. In the cases of MERS, it still kills between 150 – 500 each year over the past 5 years but is considered ‘under control’. SARS was declared officially contained in 2004.

Despite all our technology and medical advances, containment and lockdowns, wearing masks and ramping up general community hygiene standards, are still the best ways to fight these viruses.

Even when Covid-19 is either eventually contained, or becomes endemic, there will be another virus appearing sooner or later.

This trend has already kicked off and will ultimately be a profound change to the way we all live and work. Whilst real estate in some of the world’s cities is losing value and people are moving out, properties in outlying areas, and ‘retirement’ areas, are booming. This reverses a decades-long trend for people moving back to cities.

The perception that it is more dangerous living in close quarters in a city, either perceived or real, is starting to play out with tangible changes in property markets around the world.

With office spaces the situation is even more profound. Even cities like Bangkok, where the virus has been less of a concern than many of the world’s other big cities, values for office space are dropping and the demand has also dropped markedly. Suffice to say, if you’re looking for office space in Bangkok, now’s the time to snap up a deal!

It’s a term that’s in just about every article about Covid-19 these days. But before 9 months ago, we’d never heard of it. Now it’s a ‘thing’ and part of the new normal. It’s likely we’re going to all stand just a little further apart from each other from now on.

The hand shake will become just a little less used and a person with a cough or sneeze will get a sideways glance.

More people will work from home than in the past. The lockdowns proved that many jobs actually work remotely and some of the lesser-known video chat software became overnight hits. Who owned Zoom shares before Covid-19? Bet we all wish we did.

50 tonnes of dodgy durian seized and destroyed in China