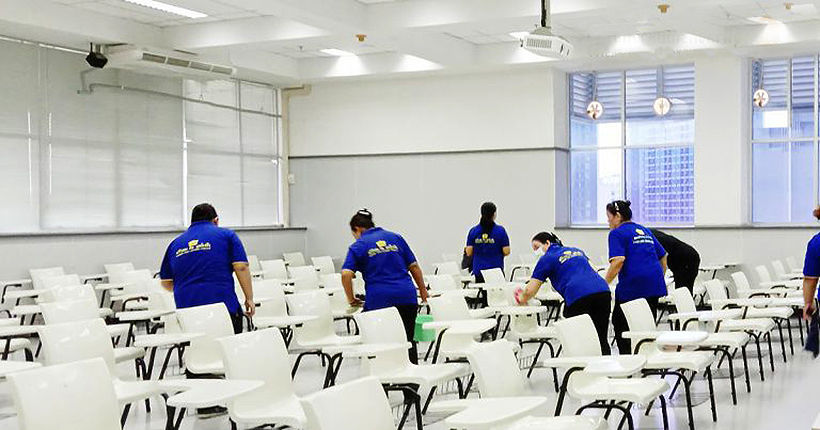 • The last service out of Singapore’s Changi Airport to Bangkok left yesterday with just over 20 passengers – mostly Thai citizens trying to get home. After Thailand’s emergency decree was announced on Thursday, it banned all but its own citizens from flying into the country with strict, almost impossible, requirements of special papers, called ‘fit to fly’ documents. Almost all passengers wore face masks and some wore gloves around the airport and on the plane.

Singapore currently reports has 802 cases of the virus and, despite being one of the early countries to develop new cases outside China, has now been praised for its swift and rigorous process of testing, quarantines and tracking of contacts.

• Thailand’s Centre for Disease Control in Bangkok yesterday reported 109 new Covid-19 cases and one more death, bringing the total of cases from January to 1,245 infections, including 6 deaths. Yesterday’s new death was a 55 year old diabetic woman.

• The Thai government is warning that people in Thailand are not practising social distancing, resulting in a steady spread of the coronavirus around the Kingdom. Despite last Thursday’s announcement of an emergency decree, people remain very ‘sabai sabai’ about the new measures to control the spread of the virus despite requests for Thais, expats and visitors to stay at home. Last week the Thai PM said if Thais don’t comply with the requests for limited lockdowns and to stay at home, then curfews will have to be enforced.

• The Centre for Disease Control has agreed that Thailand’s procurement regulations will be relaxed to allow the Food and Drugs Administration, the Government Pharmaceutical Organisation, and the Comptroller-General Department to fast-track the purchase process and import of personal protective gear for medical personnel, and other medical equipment.

• In Phuket, the Patong beach zone has become a hotbed for coronavirus infections as most new cases were found in the area in recent days. So the provincial government has closed down ALL Phuket’s beaches from last night. In addition, the Governor has also closed down all zoos and animal show venues.

The provincial communicable disease committee yesterday reported 6 new confirmed patients, one of them a man from Uzbekistan, bringing the total to 47. 4 of the new infections were found in the Patong area, 2 of them linked to Bangla Road red light district, and 1 each in Kata and Karon beaches. No deaths have been reported on the island.

There is now an advisory from the Phuket Provincial office that people must stay at home or in their accommodations every night from 8pm – 3am, with the only exception “of an URGENT errand”.

• A Thai man stranded in Ireland has filed a petition with the Central Administrative Court seeking an order to precent the enforcement of two specific requirements for Thais trying to fly home. Arthit Suriyawongkul claims the requirements are “unconstitutional”.

The current demands from the CAAT require that Thais flying home have a fit-to-fly health certificate and a letter issued by a Thai embassy or consulate certifying they are flying home. In his petition, Mr Arthit says the requirements “violate the constitutional rights and freedoms of Thais”.

“They are also a financial burden, pose health risks and are a waste of their time.”

“As well, they do not benefit the public while unnecessarily creating additional hurdles and burdens for people.”

He’s started the change.org petition “Thais must be able to go home”