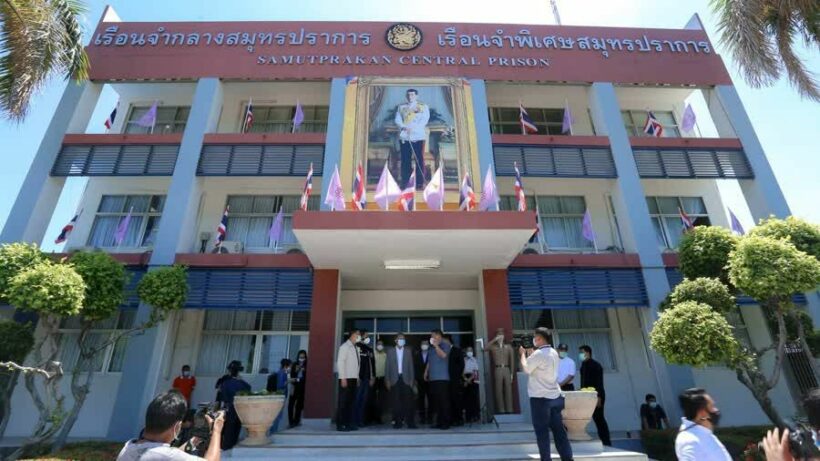 Samut Prakan, the province that sits just below Bangkok and on the upper lip of the Gulf of Thailand, has started to vaccine its local inmates at the Samut Prakan Central prison.

Further, by next week, the minister of justice, Justice Somsak Thepsutin, has announced all “white correctional facilities” will get vaccines. Justice Somsak says that they are working towards reducing “congestion”.

Justice Somsak oversaw the start of vaccinations at Samut Prakan Central Prison, which is deemed a “white prison” and has not reported any Covid-19 infections. The vaccination program leaders are optimistic they can vaccinate 1,800 people a day and concluding when all 6,515 people that “use” the prison are vaccinated.

The vaccination program was established after over a dozen prisons in the Land of Smiles reported they had Covid outbreaks. Justice Somsak said that the Director General of the Department of Corrections has been told to “reorganize” the correctional facilities so inmates can be spaced further apart.

It remains to be seen if part of “reorganizing” to reduce “congestion”, vaguely coded language that suggests overcrowding, will include releasing any prisoners on special parole.

King Cotton
59 minutes ago, Thaiger said: . . . . at Samut Prakan Central Prison, which is deemed a “white prison” . . . From this 'white prison' reference, can it safely be assumed that this prison is particularly not for coloured…

Andrew Reeve
Hello King Cotton Have a read of the attached pdf as its is a detailed study of Behind the Wall- a look at conditions in Thailand's prisons. The statistics make for interesting reading https://www.refworld.org/pdfid/58b593dd4.pdf