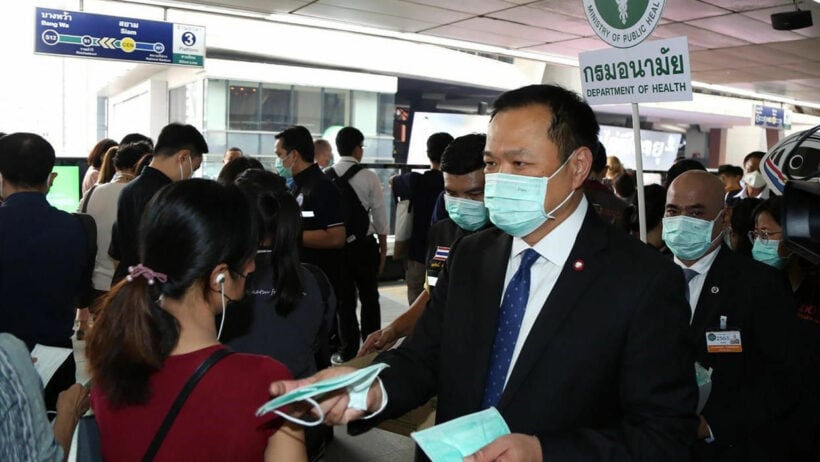 Yesterday morning the Thai Public Health Minister, Anutin Charnvirakul, also the head of the Bhumjaithai Party, lost his cool and struck out at ‘Europeans’ and ‘damn farangs’ (caucasians) saying they “should be kicked out” of Thailand for not wearing the cheap, flimsy paper face masks being handed out at the busy Siam BTS station as a government PR stunt.

Worthy as his attempts were, to press BTS travellers to adopt a precautionary attitude about the current coronavirus outbreak, mostly confined to China (all but 300 of the cases are within mainland China), his appearance did a lot more harm than good.

There was little right about the media presser from the start.

Flanked by his minions, all adorned with the flimsy pale blue face masks (which usually cost around 20 baht when the pharmacies aren’t price-gouging the situation), he spoke about Thailand’s success in limiting the outbreak within the Kingdom.

Just the day before he made another of his changes of mind saying that Thailand won’t be closing its borders to Chinese travellers.

A week ago he was insisting that Thailand would have to stop flights out of China, a proposal that was challenged by the Sports and Tourism Minister and eventually voted at last Tuesday’s Cabinet meeting as “excessive”.

Whether that decision was right or wrong, we’ll leave that to the scientists and World Health Organisation to explain in coming months.

As Anutin started speaking to the awaiting media pack, ironically without his face mask in place, he noted that some ‘farang’ weren’t taking the face-masks being offered.

“… non-compliant behaviours of foreigners should be reported to embassies”.

“All damn farangs, those tourists… that’s something the embassies should be notified about and the public as well that are not wearing masks.”

“We’re giving the masks to them and they still refuse.”

THOSE Europeans, the ‘farangs’ he was deriding, have provided the back-bone of Thailand’s growing tourism industry for decades until the Chinese started visiting Thailand in large numbers since around 2014. The numbers of Europeans have remained steady but, as a proportion, their percentage has been slowly dropping. But they’re still a vital component to the Thai tourism mix.

But his later apology, mid afternoon on the same day, wasn’t much of an apology. He apologised for his racially-charged remarks. He blamed his outburst… “on ill manners displayed by some foreigners”.

So rather than unreservedly apologising for his comments he just doubled-down and blamed the foreigners again.

“I’m sorry for losing my temper to foreigners today. I couldn’t tell where the foreigners came from or how much risk they pose.”

“We expected respect and cooperation in mitigating the outbreak from them, not slapping our hands away or looking at us in a demeaning way.

But there was a venom behind his original outburst too, beyond the actual words themselves, that was particularly worrisome. Beyond the venom was a tinge of racism that should concern anyone who is ‘caucasian’ and living in, or visiting, Thailand. The rant, from a minister, officially appointed by the Head of State, was inappropriate, ill-considered and reflected poorly on the Prayut Government.

If you’ve lived in Thailand over the term of the Prayut military, and recently quasi-democratic, government, you’d know that that there’s been a push (or is that ‘putsch’) to make it more difficult for foreigners to reside and work in the Land of Smiles. Of course the Thai government are well entitled to make foreigners jump through as many hoops as they want – it’s their country.

There has been a few ill-tempered comments coming from Immigration officials, and even the Deputy PM Prawit Wongsawon, in the past, blaming foreigners for Thailand’s problems. But this was probably the most direct reflection of those inner racial tensions coming to the surface in front of 50 cameras recording his every word.

And his words, caught in sharp focus on numerous cameras, and republished in hundreds of articles, are making the round in world media. It’s not a good look.

Some tourists refused to accept the surgical masks, prompting his comments.  He later apologised on his Facebook page for “losing it” – Bloomberg

Even the word ‘farang’ is one that makes a lot of ‘white’ foreigners bristle. When used by the vast majority of Thais, it’s just a word that’s been used for centuries to describe the ‘round-eyed’ white foreigners. Similar terms have mostly disappeared from polite discourse in the west. The indigenous Australians, are no longer referred to as ‘black fellas’ and the word ‘negro’ is considered utterly verboten in the US. Similar terminology has vanished in civilised conversation around the world because it’s now recognised as racially-charged and a completely unscientific way of defining the disparate tribes of humans. Anthropologically, we are all one race – the human race.

But there’s still plenty of residual racism around the world, not the least in Asia where historical hatreds will take generations to pass. Maybe us ‘farang’ were too hopeful that the easy-going Thais, with their willing smile and accommodating culture were too good to be true. Maybe we ARE all just walking ‘white’ ATM cards afterall, ready to be siphoned as we plough through the myriad ‘misunderstandings’ and paperwork obstacle courses at the Immigration offices. We’re just deep pockets of cash to visit Thailand as tourists, then leave, please.

Despite Anutin’s outburst, it should be discussed why he was there in the first place. It was a well-timed PR opportunity at Bangkok’s busiest BTS (Skytrain) station, just after the morning peak. The Bangkok press were invited to witness his grand gesture of handing out the ubiquitious pale blue paper face masks to passengers.

If Thai people, or anyone else in the world, hasn’t already realised that wearing a cheap, poorly-fitting piece of paper will do approximately NOTHING to protect you from Coronavirus, then you haven’t been doing your homework. The face masks, properly fitted, are a useful tool for doctors and clinicians in close contact with infected patients. They are also useful in helping prevent coughing and sneezing patients from spreading their germs.

But the virus in not ‘airborne’ and isn’t floating around waiting for you to walk into it (which appears to be the way many think it is transmitted, judging by their behaviour).

Even the World Health Organisation has published papers and websites about the unsuitability for wearing of paper face masks as a prevention for the current coronavirus outbreak. Indeed, it’s much more about washing your hands and avoiding touching your face when around infected patients. Anutin would have been better handing out washing basins and hand sanitisers if he wanted to be helpful.

And this guy is the Health Minister…. you know, the Minister of Health!! He should 1) know better 2) have been given better advice and 3) saved the government money and stayed back in his office reading the WHO published material. 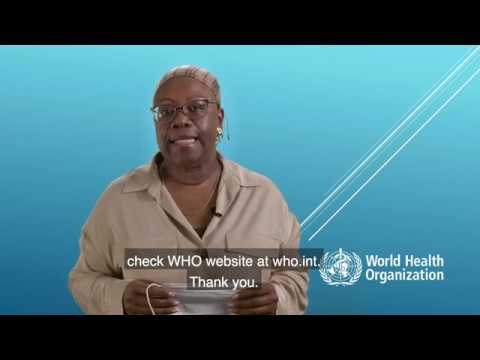