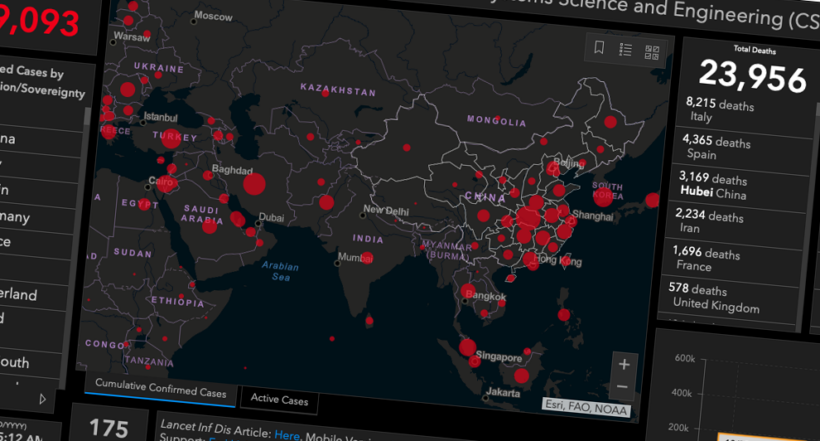 The world pushed through the half a million new cases today, along with 24,000+ deaths, as authorities around the globe struggle to contain the Covid-19 virus as it continues to spread.

Today there are 532,000+ active cases, and growing quickly, some 60,000 more identified cases than there were just two days ago. The USA is now the leader in cases, passing China’s total of 81,285 cases yesterday. Italy will also pass China’s total early today.

But why are the statistics so wonky, with death rates and reported cases so varied around the world? The problem is, as in most cases, the statistics, whilst a valuable guide and resource, can also tell the wrong story. 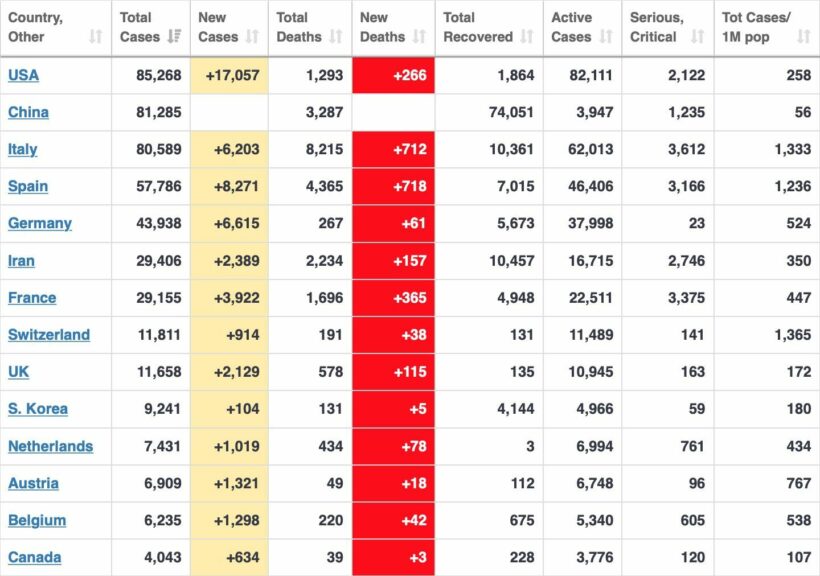 The online maps available all feed off the same data bases and are only as accurate as the information that is being fed to them.

One of the maps, presented by the Johns Hopkins University, in Baltimore, Maryland, has been a valuable resource for people following the spread of the coronavirus, being viewed more than 1 billion times every day. The Thaiger uses information from a different resource, Worldometers, but the data is all the same. There are plenty of others jumping on the digital bandwagon as the world turns to the internet for answers. 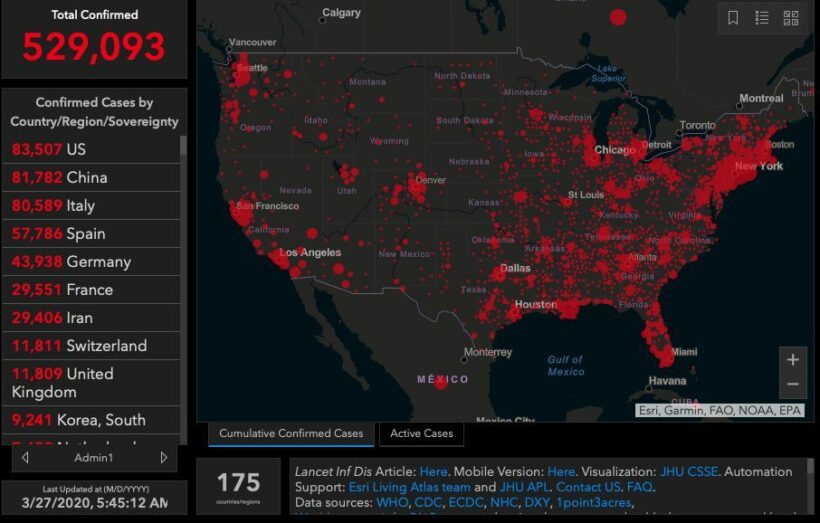 Now everyone’s an expert, it seems, armed with the latest statistics. With some extra time on our hands previously employed hotel managers are now instant epidemiologists, and English teachers are discussing the comparative death rates.

Real epidemiologists have a warning. All nations have different reporting standards, different testing protocols, different capacities to trace new cases and different attitudes to reporting cases to the public. And those differences can all be in the mix in just one country, with differences across states, provinces or districts.

The UK government says the national health system doesn’t currently have the capacity to test everyone who has Covid-19 symptoms. So only patients sick enough to require hospital treatment are getting tested, according to the UK government.

The relatively low number of tests done in the UK explains why the active case numbers appear so much lower when compared to other European countries. It doesn’t mean fewer people are sick, just that fewer people are being tested.

In South Korea, where there was an early outbreak of Covid-19, access to testing is free and available for anyone who a doctor thinks needs it. South Korean medical authorities jumped on the early spread and have been actively tracing the contacts of infected patients. The early containment, transparent reporting and easy testing protocols has allowed the country, even with 9,241 cases, only end up with 131 deaths.

In Germany, up to a reported 44,000 cases today, anyone who shows “flu-like symptoms” and has travelled to a high-risk region, or come into contact with a confirmed case in the past 14 days, gets tested. The death rate in Germany has remained around .6%.

Internationally, the comparisons rely on a cocktail of different sources. The graphic maps, which are the go-to resource for the media and real experts, pull in data from the World Health Organisation, the US Centres for Disease Control and Prevention, the European Centre for Disease Prevention and Control and China’s national health commission. There are other internal medical sources that contribute to the daily stats.

But whilst the numbers and graphs can provide an overall picture, and trends, frontline scientists spend a lot of time looking at the epidemic curve, that the the shape of the graph that captures the total number of new cases in each country day by day. 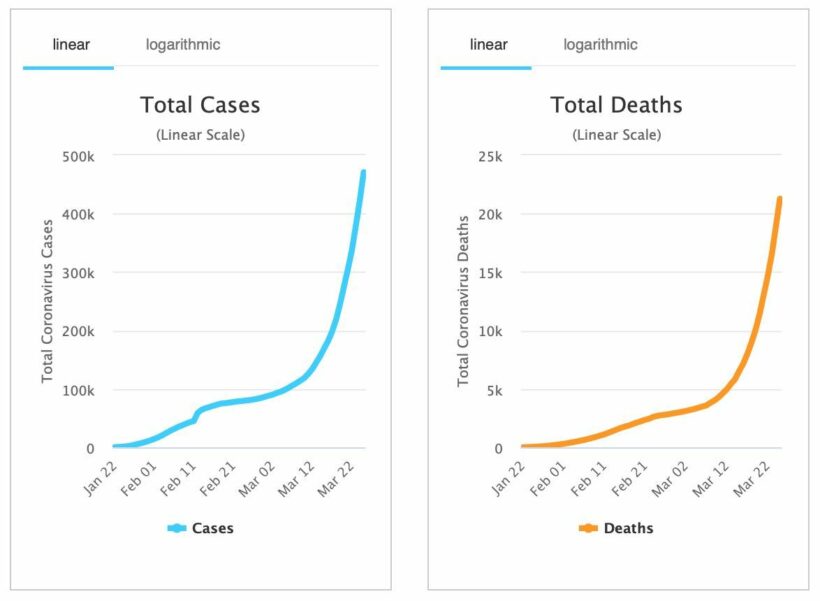 Lisa Gitelman, an NYU professor, is also the writer of a book “Raw Data’ Is an Oxymoron.”

“If the UK suddenly starts testing many more people and sees a big jump in new cases, it doesn’t necessarily mean the epidemic is spreading faster. Similarly, if a country runs out of tests, it may suddenly report a misleading drop in new cases.”

Accurate information is important, because to defeat the virus, people need to be willing to comply with strict restrictions and officials need facts to guide their decisions. Scientists say the only way to defeat the virus is through social distancing, which requires citizens to drastically alter their way of life.

On January 25, 2020, when there were only a total of 2,105 cases, almost all in China at that stage, the Chinese Government embarked on a massive social experiment, recommended by their epidemic experts, to lockdown 930 million people. Not just a ‘lockdown’, as has been rolled out piecemeal in many western countries, but a REAL lockdown – “go to your homes and stay there!”

The draconian measures appears to have worked to control the spread of Covid-19 in a country of nearly 1.4 billion. At this stage anyway. To convince people to obey rules about isolation, the world’s politicians need to make a convincing case that the situation is serious enough to merit such sacrifices.

Effective social distancing is a bit like being pregnant, you’re either pregnant or you’re not. The only real social distancing is to lock yourself away from other people, completely. With ‘social distancing’, as practiced outside China, you can ask people to stay in their homes whilst cultivating a binge of panic buying, forcing thousands to crowd together in supermarkets.

In Thailand the government has told foreigners they have to assemble paperwork and visit their local immigration department to get visa extensions, causing long, crowded queues of people scrambling and desperate to stay ‘legal’. The reality is they’re just a congregation of potential virus spreaders.

No two countries are alike when it comes to access to their healthcare standards, testing availability and medical resources. There is also huge variation in the populations’ underlying health conditions and age demographics.

Watch and acknowledge the daily statistics but understand they are only a guide. Meanwhile, do what you can to maintain proper social distancing and ensure you don’t become just another number on a graph.

What are your Consulates doing to help at this time?