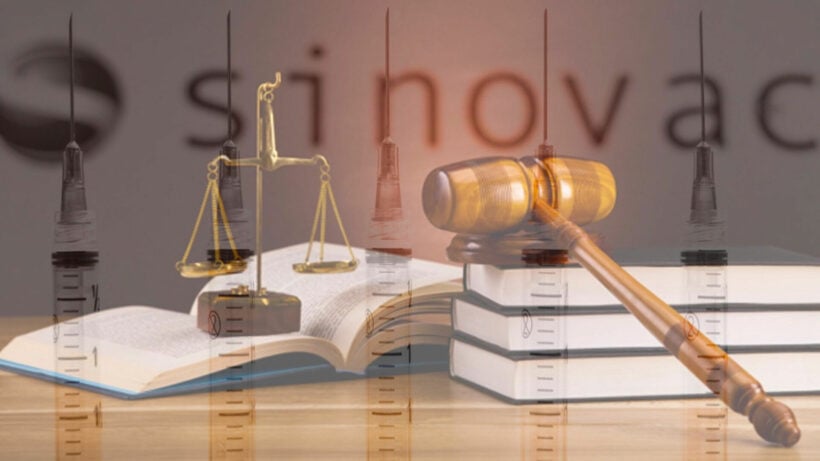 PHOTO: Lawyers Association of Thailand speak out against the government's reliance on Sinovac. (via Thai News PRD)

The chairman of the Lawyers Association of Thailand has said the government has failed its duty to protect the health of the Thai people by ordering more Sinovac vaccines instead of pursuing brands more effective against the Delta variant of Covid-19 fast becoming the dominant strain in Thailand.

The accusation comes as the Department of Disease Control defends Thailand’s Cabinet’s decision to purchase 10.9 million more Sinovac vaccines despite studies showing the efficacy of the Chinese vaccine greatly reduced against the Delta variant.

The government has a constitutional obligation to provide efficient healthcare services to the people, according to the chairman of the group of lawyers, and reinvestment in an ineffective vaccine instead of pursuing vaccines that protect more against the Delta variant is a dereliction of duty. He suggests that the government’s course of action causes damage to the nation and the people of Thailand and goes against the constitutional charter.

The DDC’s Director of Emergencies, Health Hazards and Diseases refutes the Lawyers Association assertions, arguing that Sinovac may be less effective in Delta variant infections, but has still proven worth in preventing hospitalizations and death. Furthermore and importantly, it’s also available much more quickly than other vaccines. Thailand’s vaccine rollout was so slow out of the gates that by the time they looked at purchasing the more effective Moderna, Pfizer, or Johnson & Johnson vaccine, countries had placed huge orders and vaccines contracted now wouldn’t begin to arrive until October.

In Thailand, it was found nearly 91% effective in preventing infections in a Phuket study and about 83% effective in Chiang Rai. He admits the studies were done as the Alpha variant swept Thailand, but he believes Sinovac will be at least somewhat as effective on other variants including the Delta variant.

While Sinovac seems not to be as effective at preventing the spread of the Delta strain of Covid-19 as the lawyers argue, it does seem to be a powerful defence against death and hospitalisation, which could still be a vital aid in overcrowded hospitals and keep the damage done by Covid-19 outbreaks minimized. But is it enough, or is the government throwing good money – reportedly 6.1 billion baht for the 10.9 million more vaccines – after bad?

thai3
They should have said criminal negligence, as is not signing the moderna contract until next month, what is wrong with these people?
Stonker
Quote 1 hour ago, Thaiger said: But is it enough, or is the government throwing good money – reportedly 6.1 billion baht for the 10.9 million more vaccines – after bad   So, if correct, $17 per dose.   Hardly…
Paco
And in the meantime they wasting their time on getting each other on court... every time wasting more time and more people die... people tired of the wait and slowly unprofessional doing of the government... maybe time to listen what…
Bangkok_Gary
Thailand needs another government reset. Unfortunately the current government has all the guns.

JamesE
2 hours ago, Bangkok_Gary said: Thailand needs another government reset. Unfortunately the current government has all the guns. From 1932 to 2014 there had been a coup every 6.3 years, on average. The last installed the present government. Each of…

Sinovac not effective against Delta variant, AstraZeneca is

BREAKING: Stay at home orders, travel restrictions in Bangkok and 9 other provinces